He is back by popular demand! 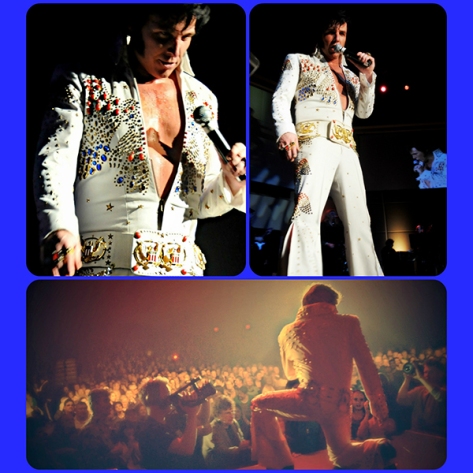 Thane Dunn has the uncanny ability to make audiences feel as if they are watching the real thing live and has been referred to as “the full Elvis package”. He is not only endorsed by world famous rock photographer John Rowlands who was hired by RCA to photograph Elvis live in concert during the ‘70s, but also by the Hank Snow Museum. He is the winner of the World’s Largest Elvis tribute artist contest and the World’s Largest Elvis Gospel Competition.

His portrayal of Presley is so convincing that it’s been called spooky. There are no wigs or glued-on sideburns in this production and he is not lip syncing, he actually sounds like Elvis.

He wears exact replicas of the costumes popularized by Presley in the early ‘70s. One even bears a stud that once adorned Presley’s very own suit, worn in Detroit on April 6th, 1972 during the filming of the MGM documentary “Elvis on Tour”. He will be wearing an exact copy of Elvis infamous Aloha costume from 1973. No expense has been spared to give you the full Elvis experience.

This world class show is backed by his Cadillac Kings. These incredible musicians, including ECMA and Shai Gospel award winners, have Elvis’ TCB band’s sound down pat. The show also features an amazing soprano singer all the way from England who has the most amazing Kathy Westmorland sound in the business and an onstage right-hand-man who not only sings harmony but also brings Thane his water, catches his guitar, passes him teddy bears, and puts scarves around his neck for the ladies.

Opening the show will be AM /Gold with their tribute to solid gold hits from Olivia Newton John, the Bee Gees and Elton John to name a few.

So get out your bell bottoms and dust off those Florsheim boots because this show is taking you back to your favourite decade. Time machine leaves promptly at 7:30 pm, so get there early.

Elvis is at the Harbourfront Theatre on Saturday, August 20, at 7:30 PM.