The Alaska cruise was closely surrounded by the magnificent Rocky Mountains. Humanity clung to their precipitous sides. We embarked from Vancouver where, in Stanley Park we viewed authentic Totem Poles. It was June- Long days and calm seas. The first stop was the state capital- Juneau, where a tour boat took us out to see pods of whales. 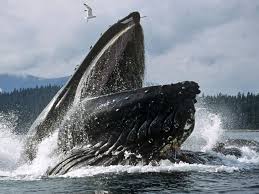 From our stateroom, actually from anywhere on the ship, we had close-up views of the Rockies. We went up the Inside Passage to Skagway from where, 118 years ago would-be millionaires took off for the Klondike Gold Rush.. Since the only province/territory in Canada I hadn’t visited was the Yukon, we went partly by bus and partly by train- with original coaches clinging to the rails, deep into the mountains to Caribou Crossing.

It was an artist’s paradise. The on to Glacier Bay, where the ice on the Margerie Glacier refracted a beautiful aqua light. Our final stop was Ketchikan. I declined to go on the Zipline with my grand-daughter. I stayed on board and sketched the coastline and watched the small planes flitting about.

Nan Ferrier’s Painting’s of the Alaska Cruise are at The Guild starting September 28.