The staff and board of Confederation Centre of the Arts are mourning the loss of Michael S. Schurman, a beloved friend who served for 12 years on the board of directors, and for the past eight years as chair of the Major Gifts and Endowments Committee. He was also the Founding Chair of the Confederation Centre of the Arts Foundation Board, a position he held until his death on Saturday, October 15, 2016, at age 79. 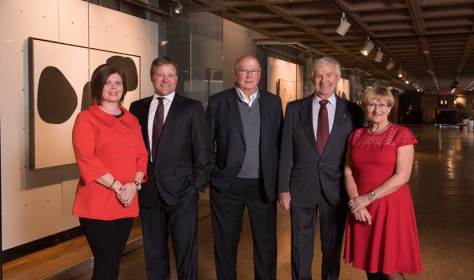 “Mike’s counsel to the board of directors and management, and his contributions, insights, and knowledge across both boards were greatly valued by his fellow directors as well as Centre staff,” said Wayne Hambly, chair of the board of directors, “His presence at Confederation Centre will be sorely missed. We offer our deepest condolences to his family and friends.”

Mike was also a generous, long-time Centre donor, passionate about the value of arts education and the significance of Confederation Centre to Prince Edward Island. Mike spent Friday night at the Centre with his wife Pat, dining at Mavor’s before attending The Nylons concert in the Homburg Theatre.

His legacy at the Centre will continue through the Michael S. Schurman Family Foundation Endowment Fund, which supports programming in arts education. Through school collaborations, summer camps, and year-round classes and activities, this fund helps introduce children to the arts in a fun and professional setting. The Schurman Fund also provides individual youth scholarships, arts outreach to youth in Summerside, and allows the Centre to continue long-running programs, such as the Confederation Centre Youth Chorus and dance umbrella. Appropriately, the venue where a number of these activities take place is named The Michael S. Schurman Family Studio in honour of his dedication and kindness.

In 2009, Mike was honoured with the Lieutenant Governor’s Award for Patron of the Arts, honouring an Islander who has made a significant financial contribution in any of the practices of visual arts, writing and publishing, music, dance, fine craft, theatre, film, or video. He donated the honourarium portion of the award back to dance umbrella.

“Besides being an exceptionally generous supporter, Mike’s experience, leadership, and commitment was extraordinarily valuable to the board, and he was hugely important in the creation and oversight of the Confederation Centre of the Arts Foundation,” said Centre CEO Jessie Inman. “This is a great loss for the Centre, and for our entire Island community.”

The Schurman family were well-known for their leadership in business and the local community, having owned and operated a construction, building supply, and related businesses throughout the Atlantic region for over 100 years. The Schurman family were Summerside residents for more than a century, with Mike having only recently relocated to Stratford. Mike led his family’s lifelong and very active involvement in many Island community causes through their charitable foundation, the Michael S. Schurman Family Foundation.

Mike built a great reputation as a talented business executive, a passionate community leader with an unparalleled commitment to his home province and devotion to his family. He was awarded an honourary degree from UPEI in 2009 in recognition of his many contributions to P.E.I. Generous gifts from the Michael S. Schurman Family Foundation span the entire Island, some of the highest profile being the re-launch of the Heart and Stroke Foundation’s Change of Heart program; the dramatic entrance at UPEI’s School of Business Administration, The Schurman Market Square; and The Schurman Resource Centre located at Holland College’s Waterfront Campus in Summerside, encompassing both a library and a computer commons.

Resting at Belvedere Funeral Home, funeral service will be from the St. James Presbyterian Church ‘The Kirk’ this Thursday at 1:30 p.m. Visiting hours are Wednesday from 2-4 and 7-9 p.m. Memorial donations may be made to the Prince County Hospital Foundation or the Queen Elizabeth Hospital Foundation.