In honour of Sir Wilfrid Laurier’s 175th birthday, Confederation Centre of the Arts is launching an original theatre production, The Laurier Project, which opens tonight in Charlottetown, the first performance in a national tour. 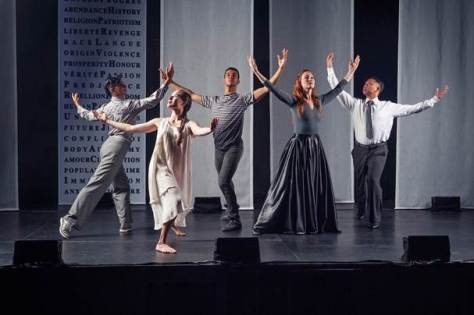 Presented in partnership with Theatre New Brunswick, this new show is an inspirational blend of movement and sound and an exploration of Laurier’s words, ideas, and passion for Canada told by a multicultural cast of Canadian performers. This CN-sponsored production is set to music composed by violinist Deanna Choi, and choreographed by Kerry Gage, highlights the transformative words of Laurier in a bold new way.

“Sir Wilfrid Laurier was a great statesman who led Canada through its most formative years,” says Sean Finn, CN Executive Vice-President, Corporate Services, and Chief Legal Officer. “He was a leader ahead of his time. He saw the railway as instrumental in tying the country together and as the key to building strong communities. CN is excited to sponsor The Laurier Project as it represents the first step in Canada’s 150th anniversary celebrations, exploring the nation’s shared history and our bold future ahead.”

Sir Wilfrid Laurier was Canada’s seventh prime minister and the country’s first francophone prime minister. A champion of the Quebec-Canada partnership, he served in the House of Commons for 45 years and is the longest serving leader of a major political party

The Laurier Project cast is made up of five Canadians from diverse backgrounds and Laurier’s vision for an inclusive country resonates: “His fairness and willingness to embrace all people stands out,” states one company member. The cast includes Byron Abalos, Christy Adamson, Emily Barker, Devon Michael Brown, and Ayesha Mansur Gonsalves.

“We are thrilled to be partnering with CN to present this exciting, original theatre piece celebrating the legacy of Sir Wilfrid Laurier,” says Jessie Inman, CEO, Confederation Centre. “Through CN’s support of this heritage initiative and others, such as our Confederation Players Program, we are together able to commemorate Canada’s 150th anniversary and ongoing evolution as a nation.”

The Laurier Project tour kicks off in Charlottetown tonight before being presented in six Canadian cities, concluding November 18 in Edmonton.

The Laurier Project invites Canadians from across the country to follow the discussion at lauriertour.ca and to share their thoughts on what Laurier and Canada’s cultural identity means to them on social media using the hashtag #lauriertour2016.