Barenaked Ladies have announced an extensive Canada ONE-FIVE-0H Fall tour that will take the beloved band coast-to-coast. With more than 24 dates to be announced, this major tour includes one night only, LIVE @ the Centre, hitting the deck at Confederation Centre’s Homburg Theatre on October 16. 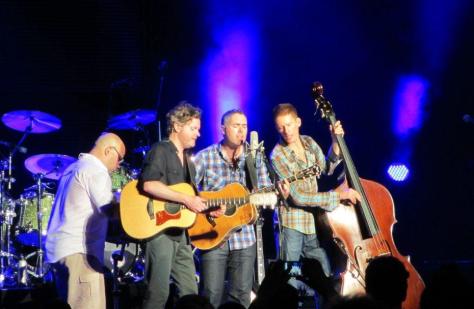 Barenaked Ladies (BNL) are currently putting the finishing touches on their 16th studio album Fake Nudes, expected to be released this fall. More information will be announced in the coming weeks. BNL has partnered with Plus1 to collect $1.00 from every ticket sold that will go to support MusiCounts, putting musical instruments into the hands of kids who need them most.

“Gotta see the show, ‘cause then you’ll know,” sings lead singer Ed Robertson on BNL’s chart-topping hit, ‘One Week.’ That’s as good a description as any about seeing these rock icons in concert, an experience filled with the kind of energy, precision, finesse, and celebration among its fans that is a tribute to the group’s remarkable longevity.

The band, which also includes Jim Creeggan, Kevin Hearn, and Tyler Stewart, is still together after nearly three decades. In that time they have produced 14 studio albums, winning eight Juno Awards, multiple Grammy nominations, and owning the theme song to one of TV’s most popular shows, The Big Bang Theory.

“I still love writing songs,” insists Robertson. “And it’s such a privilege to work with these guys. They have my back, and I have theirs. It’s pretty amazing to watch the crowd light up when we play a song we recorded 25 years ago, and then hear them sing along with something brand-new.”

BNL have most recently announced a very special collaboration with the legendary ‘Kings of A Cappella’ The Persuasions, with an album entitled, Ladies And Gentlemen: Barenaked Ladies And The Persuasions to be released April 14. The album features 14 tracks re-imagining BNL’s award-winning catalogue and the classic ‘Good Times’.

“Our fans have been on this journey with us, so we’ve kind of grown up together,” continues Roberston. “It’s a special relationship, within the band and between our fans. Every band says they have the best fans, but we actually do. And we know that because other bands tell us that.”

Special thanks are extended to Sobeys, the title sponsor of LIVE @ the Centre, as well as media sponsors The Guardian, Hot 105.5 and Ocean 100.