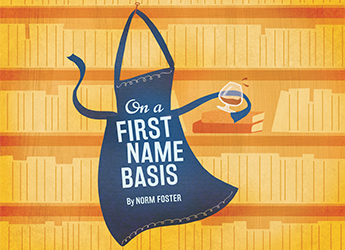 While she knows all there is to know about him, David realizes he knows nothing about the woman who has spent every day for almost three decades in his home. He decides the time has come to get to know her better. Over wine and scotch and more scotch, confessions are made, witty barbs are exchanged, and a friendship is forged.

A new play from a perennial favourite on the Victoria Playhouse stage, this is Norm Foster at his funny and insightful best. On A First Name Basis pairs smart, witty dialogue with well-rounded characters and the result is intelligent and laugh-out-loud funny.

“Witty repartee that proves that comedy can still be smart and sparkling.” – Artsforum.ca

“Foster strikes a chord with audiences all over the English-speaking world due to his striking sense of compassionate realism.”
– Halifax Chronicle Herald

On A First Name Basis by Norm Foster is at the Victoria Playhouse August 5th through September 3rd.