Renowned Cree singer-songwriter Buffy Sainte-Marie is an activist, educator, visual artist, and winner of countless awards – Oscar, Juno, and Golden Globe among them. 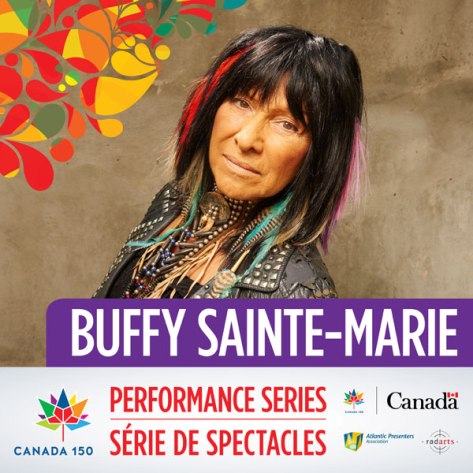 Perhaps you know Sainte-Marie from her 1960s protest anthems (“Universal Soldier”), open-hearted love songs (“Until It’s Time for You to Go”), incendiary powwow rock (“Starwalker”), or the juggernaut pop hit “Up Where We Belong,” which Sainte-Marie co-wrote and Joe Cocker and Jennifer Warnes sang for the soundtrack to An Officer and a Gentleman. One of her earliest classics, “Cod’ine,” was covered by everyone from Janis Joplin to Donovan to Courtney Love. Or maybe you remember Sainte-Marie from her five years on the television show “Sesame Street” beginning in the mid-’70s.

Power in the Blood is a follow-up to 2008’s acclaimed Running for the Drum and only her fourth studio release in more than 20 years. Although just because you don’t hear from her for long stretches doesn’t mean she’s not playing. Quite the opposite. Sainte-Marie’s creativity is always in motion, and her passport’s always in hand, touring for lectures and performances around the world with her high-octane backing band. She records only when she feels like touring, and currently Sainte-Marie is taking center stage around the world, including North America, Europe and Australia.

Producer Chris Birkett (Sinéad O’Connor, Bob Geldof) has worked with Sainte-Marie on four albums, and recognized from the start that Sainte-Marie was a singular force.

“She pays a lot of attention to her lyrics,” Birkett says, “and when Buffy says something, she actually means something.”

“I love words, I love thinking, and I recognize and value the core of a universal idea simplified into a three-minute song,” she says. “What appealed to me in folk music were the songs that have lasted for generations, but I wasn’t trying to be one of those guys. I wanted to give people something original.”

Buffy Sainte-Marie is at the Harbourfront Theatre on Wednesday November 1st at 7:30 PM.

This tour is part of the Atlantic Presenters Association (APA) and RADARTS’ Canada 150 Performance Series. We gratefully acknowledge the support of the Government of Canada.