A struggle between people in power and exploring the choices that define a person’s character and their future..Jesus Christ Superstar is a rock opera that you’ll never forget.

A wonderfully titled comedy about parents who know too much or know too little about their kids and the journey of discovery, or: how to pull your head out of the sand and stop being an ostrich. 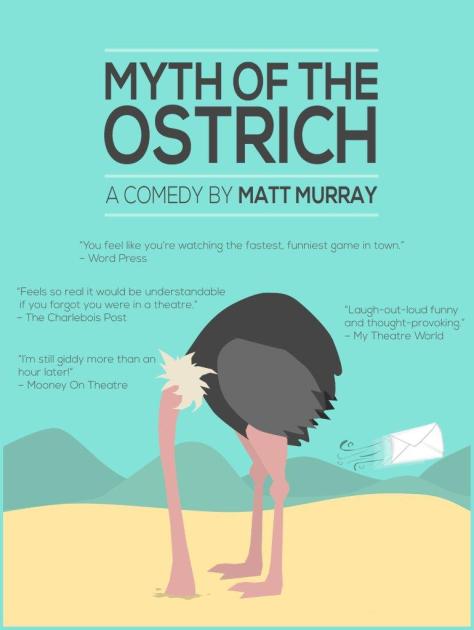 But wait, the show tells us that is a myth. Just as it’s a myth to call this play by Matt Murray just a comedy. This is a comedy with heart.

The zany insightful show is at the Victoria Theatre through September 2nd.

Atlantic Blue is the story of the great iconic songwriters from the region. Tara MacLean, a PEI born veteran of the stage, takes the audience on a journey into the past, telling the story of how music arrived and thrived on the east coast of Canada.

Using film to tell the life stories of these brilliant writers, and then song to illustrate their work, Tara transports the audience to a place of deeper understanding and connection with Atlantic Canada and our most treasured music. The show is funny, heart wrenching and beautiful, with a new, up and coming guest artist each night
to take us into the future, to where our music is heading.

This show is a timeless thread that weaves through the ages. It will captivate and inspire. The show will be running Tuesday, Wednesday and Saturday nights at The Guild in Charlottetown, PEI July 10th to September 8th 2018.

Canadian Music Legend Carroll Baker made history when she became the first Canadian to do a TV Special from Nashville and the stage of the Grand Ole Opry. She is about to make music history again.

She will, for the FIRST TIME, do a Gospel Music and Hits tour singing many of her hit songs and the Gospel songs that her fans love to hear.

Carroll Baker has won more awards and received more accolades than she could ever imagine, but this concert tour is different, it’s not about the awards, it’s about the music she loves and she will sing it straight from her heart.

However, it is the awards and the support of her dedicated fans that has allowed her to do the tour and she is very aware of that. Carroll Baker has won multiple Country Female Vocalist of the year awards, both at the Canadian Country Music Awards and the Juno Awards. She has been named Entertainer of the year in Canada and International Female Entertainer of the year in the United States. She has won best Selling Album of the year for both Country and Gospel Music and holds the record of having the most consecutive number one records in Canadian Country music. That record has not been broken to this day.

She is a member of The Canadian Country Music Hall of Fame, and a proud member of the Order of Canada.

She has toured parts of the United States and has wowed fans from her hometown in Nova Scotia to such famous venues as the London Palladium and Wembley Stadium in London, England. Now she is about to wow fans all across Canada with her new tour, Carroll Baker’s Gospel and Hits Tour.

When asked why she was doing this, she simply stated “I love country music and gospel music. I have wanted to do this for a long time and more important than anything, my fans have been asking for it. I can’t think of a better way to express my heart, my soul and who I really am than by singing these amazing songs. I hope everyone will enjoy the show as much as I know I am going to enjoy doing it.”

Guitar, saxophone, huge songwriting and a voice that won him a 2013 Canadian Folk Music Award for Contemporary Singer, Ian Sherwood Brings The Light to every stage he stands on. A born storyteller and a constant creator, his music dances the line between folk and pop. His live performances thrive on intimacy. Whether it’s a theatre show or large festival stage, his persona is irresistible and completely destroys fourth walls.

When not touring the UK, US or all across Canada Sherwood produces for other artists as well as for theatre, film and television. He most recently won a 2017 Robert Merritt for Outstanding Original Score for the play “Tompkinsville”. He was named Best Male Artist of the Year by the 2012 International Acoustic Music Awards and was the 2008 and 2010 Music Nova Scotia Musician Of The Year. Bob Mersereau of CBC Radio, Fredericton described him as “… a natural performer who entertains as much with his wit and stories as with his songs.”

Ian Sherwood is at the Victoria Theatre Monday night at 7:30 on August 27th

“The stories told here are all very different on the surface but there is a common thread running through them and that thread is one of perseverance and determination.”
-The Buzz

Stories from the Red Dirt Road is a beautiful tapestry of women’s stories. See it at the Mack this summer. — with Katie Kerr.

This August on Tuesday mornings and Thursday afternoons, we invite you to go behind the scenes with us on a theatre tour.

“We’re excited to welcome the public to explore the theatre with us this month,” says Kieran Keller, Harbourfront Theatre’s executive director. “For those who want to learn more about how a theatre works, going behind the scenes can be a really fun experience.”

After 22 years of presenting and producing many different performances, the theatre has a lot of stories to share. The guided theatre tours allow anyone to come in and hear the stories, learn about the technical side of the performing arts, and learn some of the history of Harbourfront Theatre and theatre in general.

Tours run every Tuesday at 11 AM and Thursday at 2 PM during the month of August. Larger groups are encouraged to call ahead to register by calling the administration office (902-432-3046). Accessible tours are available, and tours can be modified to accommodate all ages. Admission is by donation. For more information, contact Box Office at 902-888-2500.

The Confederation Centre of the Arts is bringing the critically-acclaimed and multi-award-winning The House of Martin Guerre toThe Charlottetown Festival this September. This intimate concert presentation, starring Adam Brazier and Josée Boudreau, is based on a true story from 16thcentury France and explores what limits an individual confronts to follow their heart.

The original book was written by Leslie Arden and Anna Theresa Cascio, and then adapted to music and lyrics by Leslie Arden. The story follows a young peasant girl named Bertrande who is forced to marry the abusive Martin Guerre.  After years of unhappy marriage, he abandons her and their son; but years later a stranger returns claiming to be Martin Guerre. He is a transformed individual and Bertrande accepts this person, but then she declares him an imposter and he is sent to jail and trial.

“Making its Atlantic Canadian debut, The House of Martin Guerreis a powerful musical about community, tradition, and what we’re willing to believe for love,” says Adam Brazier, artistic director of The Charlottetown Festival and starring in this musical.

It is one of the most celebrated Canadian musicals ever written, but it was lost to the public for decades because rights of the piece were locked up by American commercial producers. The last productions were in Toronto in 1997 and in Chicago in 1996.  This production at the Confederation Centre, directed by Mary Francis Moore with musical direction by Wayne Gwillim, is a chance for local audiences to see this concert.

“I saw this inspired musical almost 20 years ago and it remains one of the best original Canadian musicals I’ve ever seen,” says Brazier.

Leslie Arden is one of Canada’s foremost musical theatre composers. Her extensive career has taken her around the world, but her love of theatre came from watching The Charlottetown Festival, where her mother, Cleone Duncan, performed for many years in Anne of Green Gables – The Musical™.

The House of Martin Guerre (Concert Presentation) comes to the Homburg Theatre on September 18 at 7:30 p.m. and tickets can be purchased now. Appreciation is extended to the title sponsor for The 2018 Charlottetown Festival, CIBC. Media sponsors are Ocean 100, Hot 105.5, and The Guardian.

Did you catch this past week’s performance of Jesus Christ Superstar with Alicia Toner? 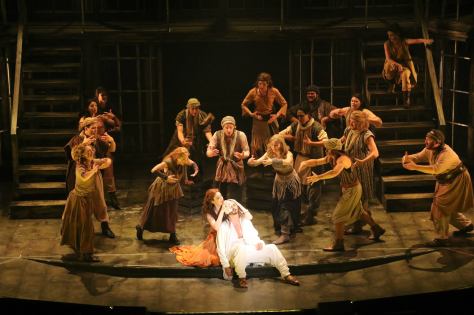 Let’s prep for another amazing coming week with Lee Siegel as Judas back on the mainstage at the Confederation Centre!

The story of Jesus Christ Superstar is told through the eyes of Judas Iscariot – a tragic figure who is dissatisfied with how Jesus is leading his disciples and what downfalls may come because of it. This season at The Charlottetown Festival, audiences have been raving about actor Lee Siegel’s interpretation of the role.

This week, people who come to our production of Jesus Christ Superstar will see a new interpretation, as actress Alicia Toner fills in for the iconic part.

“I’ve known since I got my contract for this year that I would be going on this week, so I started going back to the album and the movie and listening again,” says Toner about her preparation. “I also had the entire rehearsal period to watch Lee (Siegel) make Judas into a compassionate but conflicted being and had my own understudy run to get a feeling for stepping into this role.”

Toner is a well-known singer and performer on P.E.I.. Earlier this year she won the SOCAN Songwriter of the Year award with MusicPEI and has been on The Charlottetown Festival main stage for the past six seasons.

The role of Judas, itself, has always been a dream for Toner to play. Toner says, “I definitely did not think I would ever be able to say I got a chance to play Judas. It means a lot to be able to do it here in Charlottetown.”

Adam Brazier, director of Jesus Christ Superstar and artistic director of The Charlottetown Festival, is also excited to see Toner in this role.

“Alicia Toner is a powerhouse force of nature. Her incredible vocals and ability to interpret this story without gender bias or any shifting of narrative offers an amazing experience for anyone who is familiar with this highly celebrated production,” adds Brazier.

For Toner, she feels the narrative of the story doesn’t change with a woman in the role of Judas, but by simply having a different actor playing that part it will be a new experience for audience-goers.

“If you’ve already seen the show, you know that Lee is a force to be reckoned with. We are obviously two different people, genders aside, and seeing the show with a different Judas will be a different experience. That being said, the narrative remains the same. One thing I love about playing Judas as a woman is that nothing needs to change.

If you’ve heard the musical, you also know how vocally-demanding the role of Judas can be. Toner has years of experience as a singer and performer that has allowed her to prepare, vocally, for these parts. Only in one song was the key changed and the rest remains the same. Still, even though she feels she’s ready, she’s also nervous and excited.

“Name the emotion and I am feeling it – excited to share the stage in a different context with this incredible cast and thankful to Lee for creating such a beautiful character for me to step in to.”

Alicia Toner will be taking on the role of Judas from August 15 to 19 and can be seen throughout the season in Jesus Christ Superstar as a Soul Sister and Anne of Green Gables-The Musical as Prissy Andrews until September 22.