Historian and author Margaret MacMillan is the 2018 Symons Medal receipient.

Her research focuses on British imperial history, international history of the 19th and 20th centuries, and the causes of war, specifically World War One.

Here’s an article from a few years ago on women who work in the field of history:

“They came from far and wide and with enormous expectations. He wasn’t about to let them down – ‘Ladies and gentlemen I shall now stop the rotation of the earth for three full seconds!’”

The one and only Dr. Professor Kubínek is a COMIC GENIUS, VIRTUOSO VAUDEVILLIAN, and all-around charmer who gives audiences an utterly joyous experience they’ll remember for a lifetime.

His latest creation, TOMÁŠ KUBÍNEK – MIRACLE MAN, is a rip-roaring revival of strong-man stunts, couples-counseling, snake-healings, and mass-hypnosis that leaves audiences dazed, beaming and in love with life once again.

Age Advisory: 8 to 108
Please note that due to the focused nature of this performance this program is not recommended for young children.

That first day excitement! Our new CEO Steve Bellamy has started his first week at the Confederation Centre of the Arts.

If you see him around, give him a big P.E.I. welcome!

Guest DJ Will Yarr of Halifax will set the beat, while ridiculous costumes, projections, and the ever-popular Spinning Wheel of Fortune Cookie will intrigue partygoers around every turn, occupying all levels of the Centre gallery. Among other light-hearted activities, there are even rumours about carpentry!

Tickets be purchased at the Centre box office or via confederationcentre.com, or at the door. Patrons must be 19 years of age to attend.

A fiery redhead. A grieving son. A gregarious family on the Rock. The musical pull of the Atlantic. A young woman’s search for family. Sit a spell. Have we got a story for you! Confederation Centre has announced the playbill for The Charlottetown Festival–the largest musical theatre festival in Atlantic Canada.

Sponsored by CIBC, the Festival will commence June 28 with the much anticipated return of Kronborg–The Hamlet Rock Musical. This original Canadian work has become a cult favourite for Islanders who recall the 1975 production starring Brent Carver and Beverly D’Angelo. This remains the only production in the history of the Festival to be produced on Broadway.

Based on the Shakespearean tragedy Hamlet, originally written by Cliff Jones, this musical rocked the rafters in 2017, selling out a concert presentation at the Historic St. Mary’s Church in Indian River and later packing the Homburg Theatre. Next summer’s fully realized production will weave the story of a prince who plots revenge on his uncle for taking his beloved father’s life.

Festival favourite and Island son Aaron Hastelow, coming off rave reviews as the lead in this season’s Jesus Christ Superstar, will return to star as Hamlet next year. Additional major casting information will be revealed later this fall, when the Centre offers a ‘Buy-1-Get-1’ sale for a limited time only, from November 17 to December 1. The Festival will also announce production information on the 2019 Confederation Centre Young Company.

The Festival’s crown jewel Anne of Green Gables–The Musical™ will return for its 55th consecutive summer, a testament to the global appeal of a classic inspired by a classic. This enduring story of an orphan girl who came from away and changed the Island forever will run June 29 to September 28.

A mother, a daughter, three possible dads, and a trip down the aisle you’ll never forget! Back to the Centre by popular demand, it’s Mamma Mia! This sunny ABBA-driven tale follows a daughter’s quest to find her father by inviting three men from her mother’s past to her wedding. Presented as a co-production with the Grand Theatre in London, Mamma Mia! will play on P.E.I. from August 9 to September 28.

Over at The Mack, the Festival is thrilled to welcome Tara MacLean’s Maritime love-letter, Atlantic Blue. This celebration of East Coast songwriters previously played at The Guild, and will show from August 2 to September 28. MacLean explores the place and people behind classic songs like ‘Sonny’s Dream’, ‘Put Your Hand in the Hand’, ‘Fare Thee Well Love’, and more. The Island songwriter celebrates those who found a way to create beauty from the challenging experiences in their own lives. With the addition of members of the Festival and its orchestra, this new production will make every Atlantic Canadian proud.

From July 20 through September 28, Spinning Yarns will shine a light on Newfoundland and Labrador in the early ‘80s: a world of raucous adventures, death defying escapades, and dubious childcare! This hilarious evening of story and song stars festival favourite, Stephen Guy-McGrath (Evangeline, Million Dollar Quartet). Through it all shines a fierce love of family and a boundless longing for home.

The Centre wishes to acknowledge the Department of Canadian Heritage, the Government of P.E.I., and the City of Charlottetown for their continued support. Media sponsors are The Guardian, Hot 105.5, Ocean 100, and CTV.

Watermark Theatre is thrilled to announce that box office revenue for the recently completed 2018 summer season was up by 10% over last year. Productions of Dial M For Murder and A Moon For The Misbegotten both exceeded expectations while season subscription passes increased as well. In fact, Dial M For Murder became the highest grossing production in the history of the company. The productions’ success is attributed to the extremely high quality of work from all the artists involved, wonderful word-of-mouth throughout the Island, a successful marketing plan, and exceptional reviews from both The Guardian and The Buzz.

This marks the third year in a row that box office revenues have increased for Watermark since Artistic Director Robert Tsonos and General Manager Andrea Surich took over the company in the Fall of 2015. 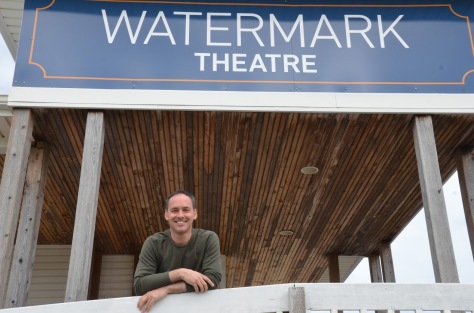 Robert is of course thrilled with how audiences have responded to his programming. “We seem to have reached a tipping point where word of mouth across the Island has boosted our audience numbers. People have started to spread the word about the work we do here in North Rustico and it’s very satisfying to see so many full houses. People are driving from across the Island now to see our shows and letting tourists know how to find us. We feel like we really have the support of the whole Island behind us now. It’s a great position to be in”.

Andrea Surich says that the theatre has become an economic engine for the community. “The restaurants and shops in North Rustico and surrounding area keep getting busier and busier. We help them out by luring new visitors to the area and they help us out by allowing our patrons to have a bite to eat or do a little shopping before one of our shows. A full summer evening’s experience.”

Programming for Watermark’s 2019 summer season will be announced very soon.

Why Support the Victoria Playhouse?

The Victoria Playhouse, housed in the historic Victoria Community Hall, has produced 36 professional Festival Seasons, and is firmly established as a treasured Island tradition. As a not for profit organization we rely upon the support of individuals, businesses and public funders to help us present the annual Playhouse Festival. Your donation will help ensure the historic theatre in the tiny community of Victoria by the Sea continues to thrive. Thank you.

Ways you can give to the Victoria Playhouse

All donations are 100% tax deductible and an official receipt will be issued.

Thank You to our Private, Business and Public supporters. We couldn’t do it without you!

One last week before Anne hangs up her hat for the season!

Fascinating Ladies is a tribute to the great girl groups of the last century, performed by three talented Island gals! This delightful musical revue takes the audience on a journey from the 1920s to the 1970s, featuring memorable songs from such legendary female ensembles as The Boswell Sisters, The Andrews Sisters, The Exciters, and The Chordettes, interwoven with stories of life on PEI from each era. Including songs like Boogie Woogie Bugle Boy, Tell Him, Sentimental Journey, Java Jive, In His Kiss: The Shoop Shoop Song, and more, this show will transport you in a fascinating way!