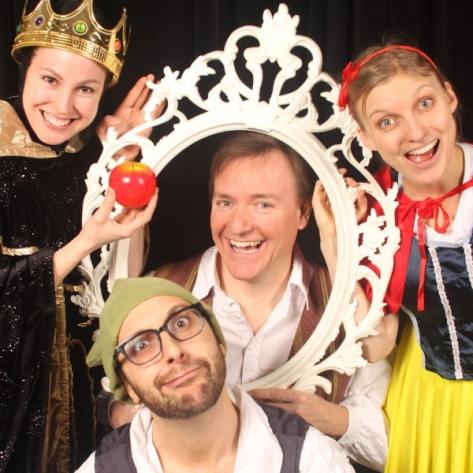 The Queen has always been the “fairest in the land”. Her Magic Mirror tells her so! But when the Queen hears that Snow White has surpassed her, she’s willing to do whatever it takes to get rid of her… forever! Fortunately, Snow White escapes into the Deep Dark Woods, where she chances on a tiny cottage. Little does she know that the Seven Dwarves living there will help save her! The classic story of our heroine, as she encounters hapless Huntsmen, bad apples, and little men with big hearts and short tempers, comes to life as DuffleBag helps Snow White towards her “happily ever after”!

About DuffleBag Theatre:
Since 1992, The “Nearly World-Famous” DuffleBag Theatre has traveled the globe with their original adaptations of fairy tales and classic stories. With wit and humour for all ages, DuffleBag creates theatrical magic by inviting up audience members as the stars of the show! The result is an exciting, interactive and unique experience for all. It’s no wonder DuffleBag performs over 600 shows annually, at theatres, schools and festivals across North America and beyond!