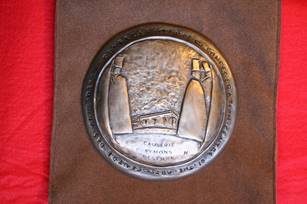 Confederation Centre of the Arts announced today that the 2019 Symons Medal will be awarded on Friday, November 1 in Charlottetown, Prince Edward Island.

The Symons Medal is one of Canada’s most prestigious honours, recognizing an individual who has made an exceptional contribution to Canadian life. Held each fall, the medal ceremony and its associated lecture create a national platform for a prominent Canadian to discuss the nation’s current state and future prospects.

The award is presented at Confederation Centre of the Arts—Canada’s living monument to Canadian Confederation—in honour of the meetings of the Fathers of Confederation, who first gathered at Province House in the fall of 1864.

The Centre also announced today that the 2019 recipient of the Symons Medal will be revealed on Tuesday, May 7. The Symons Medal Ceremony also includes an hour long address in which the medallist reflects upon the current state of Canadian Confederation using themes related to their professional pursuits.

The 2019 Ceremony will take place in the Homburg Theatre and will also be livestreamed on the Centre’s YouTube channel. Tickets for this important ceremony will be available via the Box Office at a later date. Stay tuned for further event updates on social media: @confedcentre and via hashtag, #Symons2019.

In related matters, the annual Symons Medal Student Essay Contest for the 2018-19 school year is still active, with prizes totalling $2,000. Organizers are accepting submissions until April 30, 2019 and the top three award recipients will be recognized during the 2019 Symons Medal Ceremony. For complete details, visit Confederation Centre’s website.

About the Symons Medal Ceremony and Lecture:
The Symons Medal and Lecture Series is named in honour of Professor Thomas H.B. Symons, a long-time supporter of Confederation Centre of the Arts and a Board Governor. Professor Symons, the founding President of Trent University, is widely recognized for his work in the field of Canadian Studies, particularly within public policy, heritage, and education.