Join us to celebrate CN’s 100th anniversary with a free outdoor concert. Celtic Rant is a Nova Scotian trio, consisting of Victor Fraser, Rob Wigle, and Rob Greene, specializing in traditional Celtic tunes and folk lyrics, as well as original songs with a Roots/Traditional flavour. Celtic Rant perform stunning harmonies and are proficient on various instruments, including guitar, banjo, mandolin, fiddle, bouzouki, and pipes, while their exuberant onstage camaraderie and good, old-fashioned Maritime storytelling make their live concerts a truly entertaining experience. Their latest album Ornaments was nominated for Traditional/Roots Recording of the Year at the Music Nova Scotia Awards in 2018.

Celtic Rant’s live show covers every possible path along the Celtic music tradition, from original compositions to sea shanties, traditional jig sets, and Clancy Brothers covers. Playing almost a dozen instruments between them, the trio sang in resounding and effortless harmonies. They include first-class storytelling between songs, honouring the other great Celtic tradition.” – Inverness Oran

Full Company Announced for Atlantic Blue at The Charlottetown Festival 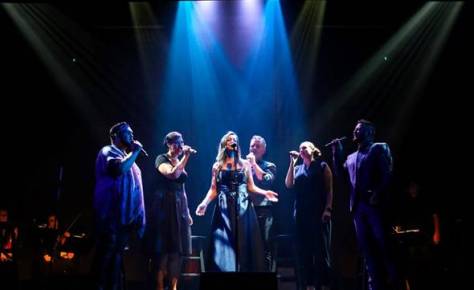 In this musical celebration of songwriters, MacLean explores the places and people behind iconic anthems like ‘Sonny’s Dream’, ‘Put Your Hand in the Hand’, ‘Fare Thee Well Love’, and many more. The JUNO-nominated performer and an all-star cast and band pay homage to those fellow musicians who found a way to create beauty from the challenging experiences in their own lives.

To say that anticipation is running hot for this new version of Atlantic Blue would be an understatement, with ticket sales flying all summer long and interested outside parties lining up to explore future touring for the new production.

After two years on offer at The Guild, some changes for the 2019 Festival version of this show include direction from Mary-Francis Moore; major visual design and structural changes; new musical orchestrations and arrangements; and the addition of four orchestra members and five back-up singers, who also provide narration.

These performers are all Festival favourites, and include Josée Boudreau (the star of 2015’s Evangeline), Alana Hibbert (‘Gertrude’ in this season’s Kronborg), Jacob MacInnis (Kronborg, Jesus Christ Superstar),Andrew McAllister (eighth season, Marcellus in Kronborg), and Brendan Wall (Spoon River, On the Road with Dutch Mason). Each are known for their powerful and signature vocal talents, presenting a stronghold of talent for MacLean and all the musicians to collaborate with.

Like these supporting voices, four members of The Charlottetown Festival Orchestra will also cross the street from regular performance with Anne of Green Gables—The Musical and Kronborg this summer. Joining in at The Mack are: Norman Adams (cello); Isabelle Fournier (violin); Karen Langilee (violin); andSusan Sayle (viola). Craig Fair is Music Director as well as the arranger and orchestrator for Atlantic Blue.

Adam Brazier is artistic director of The Charlottetown Festival.

The Guild is a Not for Profit Arts and Culture Hub with a provincial mandate to support new, emerging and professional artists, creative industries, and community organizations through subsidies, mentorship, training and professional development opportunities. We present and produce first class theatre 12 months of the year in our 175 seat black box performance space. Our Gallery at The Guild presents 6 months of curatorial artists paid exhibitions and an additional 6 months of community based exhibits in our public gallery yearly. We also offer versatile rehearsal space for artists as well as networking and promotional opportunities for Island artists, the public and the cultural sector.

We are the proud owners of a building in the heart of downtown Charlottetown (formerly a Royal Bank of Canada branch) In addition, we also house a Recording Studio, A Musical Theatre school for grades K to 12, and office space for several other creative industries; some of which are Music PEI, Creative PEI, This Town Is Small, and Federation culturelle de I’IPE. The Guild provides a community board room, a creative lab, weekly drop in mixers and several other spaces for artists to grow and flourish.

With the support of an active board, an energetic creative team, government partners and the community we have completed four infrastructure improvement projects, we have hired students through the Canada Summer jobs initiatives, created a Theatre Mentorship Program and present an annual Pay-What-You-Can spring festival. The Guild has become a venue where artists get much needed exposure, arts groups have a space to create, and the community has a gathering spot where everyone feels welcome.

We have five full time employees (doing the work of many) and more than 25 part time support staff members. In addition to this, The Guild is indirectly responsible for an additional 65 part time cast and crew from Festival Season.

Having said this, we are a small organization doing big things. To continue to operate we rely on the support of the community, local businesses, individuals and most importantly, investment from our three levels of government.

The Guild is a true reflection of Canadian culture- inclusive, relevant, accessible, exciting and entertaining.

“Concert of Hope was born out of a desire in the heart of the Summerside United Pentecostal Church to give back to our community in a unique way.  The concert has been prayerfully planned to bring an evening of spiritual ministry while at the same time assist in precipitating a fundraising campaign for Prince County Hospital.  This year, we would like to dedicate the funds raised at the concert towards the goal of purchasing new heart monitoring systems.  It is our prayer that our contribution and the presence of Jesus will inspire and bring hope to many hearts and make us ‘better together!’”
– The Summerside United Pentecostal Church

Larry Carter started playing guitar at age 6. Growing up in a musical family and singing in a trio with his sister and mother on a local radio broadcast and in churches through his childhood fueled his love for music and the guitar.

In early 1989 Larry joined the McGruders and spent 4 years on the road with them touring and recording “Come Fly with the McGruders.”

Leaving the McGruders in October of 1992, Larry embarked on a solo ministry and has now over 20 years of ministry across the US and Canada.  He has also played guitar on hundreds of CD releases.  Larry is the songwriter of several songs including “Sunday School Girl,” “When I Found Jesus I Lost the Blues,” and has songs recorded by Ivan Parker, Tim Spell, Karen Harding and Greg McCool.

Check out the review from The Buzz – PEI’s Guide to What’s Going On on this production that JUST opened at the Mack.

Final Week to See the Hilarious and Heartwarming Where You Are!

Playing until Sunday, July 28 at the Victoria Playhouse