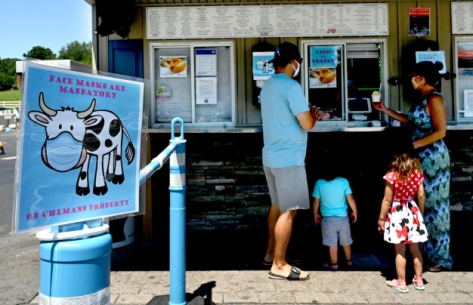 “Well, I called my congressman, and he said I’d like to help you, son, but you’re too young to vote, there ain’t no cure for the summertime blues.”  Eddie Cochran

“Mom said you’re not leaving and you’re coming to my birthday party this year,” Margaret said, putting down her ear of corn, her lips peppered with flecks of salt and smeary with butter.

Vera Glass’s brother, sister-in-law, nephew and niece, Frank’s sister and her new boyfriend, a policeman who lived nearby, were visiting on the Fourth of July, in the backyard, a breezy sunny day in the shade, crowded around a folding table-clothed table doing double duty, food and drink and board games.

Maggie was born seven almost eight years earlier. She was due to officially come to life the third week of September, four five days after Frank and Vera expected to be back from Atlantic Canada but was born on the first day of the month.

“Where do you go in the summer?” Maggie asked.

“We go to Prince Edward Island, a small town called North Rustico, but we stay in a cottage in the National Park, a family owns the land, they’ve been there for almost two hundred years. We leave in mid-August and stay through the first couple of weeks of September, which is why we miss your birthday party.”

“You always send me a present. I like that. But last year you sent me a sweatshirt with a red leaf on it that was ten times too big.”

“You’ll grow into it,” said Frank.

“Maybe I will, but maybe I won’t,” said Maggie. She was a genial child but could be a testy cuss. She knew her own mind rounding out her seventh year.

“Why aren’t you going? Is it the virus?”

The 20th century was the American Century. The United States led the way socially economically brain-wise learning-wise and in every other wise way. In 2020 it led the way in virus infections, far outpacing the next two contenders, Brazil and India. The flat tires in charge can’t get anything done, from building their useless wall, all three miles of new wall, to securing useful virus tests.

North Korea and Iran are still making atom bombs, there’s no China trade deal, the deficit has skyrocketed, and race relations have gotten worse. All that’s left is for the other shoe to drop. On top of that, Hilary Clinton isn’t even in jail.

“Yes, the bug,” said Frank. “The Canadian border is closed, and even if we could get into Canada somehow, the bridge to the island is closed except for business.”

In May President Trump said, “Coronavirus numbers are looking MUCH better, going down almost everywhere, cases are coming way down.” In June he said the pandemic is “fading away. It’s going to fade away.” On July 2nd he said, “99% of cases are totally harmless.” Four days later, on July 6th, he said, “We now have the lowest Fatality Rate in the World.”

John Hopkins University subsequently reported that the United Sates has the world’s ninth-worst mortality rate, with 41.33 deaths per 100,000 people. It was a bald report. They didn’t capitalize the numbers.

“They built a new bridge to our house. I know all about it, we drove over it two weeks ago. Mom was so happy. It’s a big bridge, too, the other one was small and always breaking.”

“You know the bridge you go across from downtown, when you go up the rise past the baseball stadium where the Indians play ball, on your way to Lakewood?”

“It’s called the Main Avenue Bridge and it’s two miles long. The bridge that goes from Canada to Prince Edward Island is almost 5 times longer than that. It’s as long as the distance from downtown to our house.”

“That can’t be,” Frank’s nephew Ethan blurted out. “That bridge is too long!”

“How do you know, Bud, you can hardly count,” said Maggie. She called Ethan Bud. They were buddies, although they didn’t always see eye-to-eye.

“I can so count, I know all the dinosaurs, there are a million of them,” said Ethan.

“What’s a million and a million?”

“OK, what’s the biggest dinosaur ever?”

“No! It’s the Argentinosaurus, and he weighed a million pounds.”

“If you can’t explain it simply you don’t understand it well enough,” said Albert Einstein.

As of July, there were more than 300,000 cases of the virus reported in children since the start of the pandemic. The Executive Office of the Federal Government has repeatedly maintained it poses almost no threat to them. “The fact is they are virtually immune from this problem,” President Trump said.

“How do you know about the virus?” Frank asked.

“Everybody knows about it. The whole world knows.”

“They even know in Antarctica,” said Ethan.

“Do you know anybody who got it?”

“A girl in school got it from her mom,” Maggie said. “I took piano lessons with her.”

“Are there going to be fireworks tonight?” Maggie asked.

“No, the city cancelled them.”

“Here there were fireworks last night, we sat on the front porch, until after midnight, but it was just people in the street or their yards. There were some big pops over there by Madison Avenue. I think they were shooting them off from the empty lot. We could see bottle rockets over the trees.”

“You said you knew about the virus, but how do you know?” asked Frank.

“The news about it is on every day on TV,” said Maggie.

“We have a TV, but we don’t have TV,” said Frank. “We only have a couple of streaming services for movies.”

“Do you watch TV all the time?”

“We don’t watch TV, but we watch it all day,” said Ethan.

“We don’t really watch it, but it’s always there,” said Maggie.

Parents are urged to pay attention to what their children see and hear on radio online television. They are cautioned to reduce screen time focused on the virus since too much information on one topic can lead to anxiety in kids. Talk to them about how stories on the web might be rumors and wildly inaccurate.

“Well,” Frank said, “your father knows best.” He wasn’t going to get into a no-win argument with his brother-in-law. His sister’s boyfriend was a policeman at Metro Hospitals. Frank didn’t want his ears pricking up. He wouldn’t understand it’s all in your head.

“Are you worried about the virus?” Frank asked.

“Would that help?” Maggie asked, biting into a burger. “This is yummy good.”

“No, it would probably just make you crazy.”

“Yes and no,” said Frank. “My given name has always been Frank, which is short for Francis, like we call you Maggie even though your name is Margaret, but my family name, what they say is your surname, used to be Kazukauskas.”

“What happened to it” asked Maggie. “Why is it different now.”

“When my father came here, to America after World War Two, the immigration people said he should change it to something other people could pronounce, that they could say without too much trouble, so he changed it to Glass.”

“Are you staying home more because of the virus?”

“Yes!” both of them exclaimed.

“Do you have to wear a mask when you go somewhere?”

“We cover up,” Maggie said. “My face gets hot, my head gets hot, and my hair get hot. It makes my glasses fog up.”

“I have a tube mask with rhino’s and bronto’s on it,” Ethan said. “But I can’t breathe, so I just rip it off until mom sees.”

There was a box of Charades for Kids on the table. “Three or More Players Ages Four and Up.” Frank pointed at it.

“Are you ready to play?”

Maggie rolled around on the lawn, flapped her arms, rolled her eyes, and hugged herself. Nobody had any idea what she was doing.

“Going to bed!” she yelped.

Ethan did a somersault.

Maggie rolled on the ground holding her head and grimacing like a mad chipmunk. Everybody watched with blank faces, stumped.

Ethan slashed the air with his hands.

Maggie jumped, waved her right arm in circles, flapped it back and forth, and licked her lips. As the one-minute hourglass dropped the last grain of sand to the bottom, she fell down on the grass. Everybody was stumped again.

“Frosting a cake! I can’t believe nobody got it.”

Ethan got on all fours like an anteater, pretended to be eating something with great chomping motions, and clomped to the driveway and back.

One day his mom asked Ethan if he wanted to go out on his scooter.

“Every single day I see the Amazon truck and the FedEx and the white trucks go past me,” said Maggie. “They turn around at the cul-de-sac thing, they just rush back, driving crazy. I run to the backyard.”

“There’s a big field and woods past our backyard,” Ethan said.

“We’re stuck at home but it’s summer, it’s nice outside, the sun is shining, and we all go for walks,” Maggie said.

“Are you going back to school in the fall?” asked Frank.

About two months away from hopes there will be a return to school, many parents were looking to new findings which suggest children are less likely to get and spread the virus. In late June the American Academy of Pediatrics, which advocates for “having students physically present in school,” published reopening guidelines. They stated that children “may be less likely to become infected” with the coronavirus and to spread the infection.

Living and breathing in-person face-to-face time is what makes school a school. “Better than a thousand days of diligent study is one day with a great teacher,” is what one Japanese proverb says.

“I want to play something else,” Maggie said. “Can you teach us how to play Pictionary?”

They put the never-ending news of the pandemic away, cleared one end of the table, and unfolded the game board, setting out the pencils note pads special cards. “Quick Sketches, Hilarious Guesses” is what it said on the yellow box, and that is what they did the rest of Independence Day, the clear sky going twilight, lightning bugs flashing on off on off, and neighborhood kids shooting off red glare Uncle Sam Phantom bottle rockets in the alley behind them.