Watermark Theatre’s Board of Directors announced that it would be naming its stage for newly retired founder and artistic director, Duncan McIntosh. McIntosh, whose contribution to dramatic arts in Prince Edward Island and throughout Canada is well‐known, retired this past summer after bringing the Watermark into its most successful season to date. 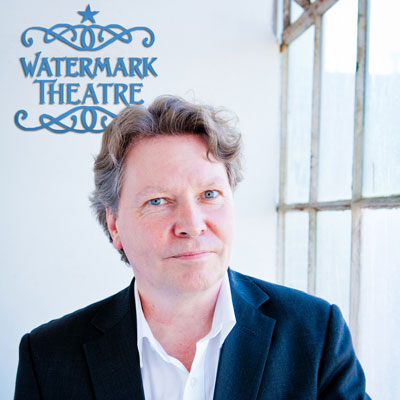 Past chair of the Watermark Board of Directors, Mary Crane, commented at a recent celebration in honour of Duncan: “During my time as Chair of the Board, I came to truly respect the talent and passion Duncan brought to every aspect of writing, directing and theatre development. No challenge defeated him and every season was a triumph.”

“Duncan’s respect for the people with whom he engages is admirable and much appreciated,” remarked Lois O’Neill, current Board Chair. “His energy, creative mind and nature, and his determination to build an exceptional classical theatre in our province are inspiring. We are fortunate, indeed, to have had him to lead us to this point. Naming our stage in his honour is tangible recognition of his exceptional gifts, all devoted to nurturing this Theatre since its opening in 2008. At that time, it was to honour the 100th Anniversary of the publication of Lucy Maud Montgomery’s Anne of Green Gables; since then, he has held true to presenting professional and classical theatre on Prince Edward Island.”

Mr. McIntosh’s visionary perception of Canadian theatre led to the creation of ReIgnite Inc., a unique Watermark endeavour focused on the celebration of the 150th anniversary of Canada’s confederation talks that took place on PEI. Its production of ‘Canada 300’ presented nine short original plays in twenty‐one venues across Canada from February to April, 2015.

Each play, grounded in an historical or current facet of Canada, contemplated the future unfolding of Canadian society. Following every performance, audience members discussed the plays and their own wishes for Canada in the next 150 years. The process continued as part of last summer’s Watermark season where it was well received.

In September, this year’s Palmer Conference at UPEI further explored considerations for Canada in the next 150 years. There were thought‐provoking presentations, panel discussions, and opportunities to engage in discussion with delegates from each of the twenty‐ one communities in which ‘Canada 300’ played last winter. From examination of First Nations concerns and immigration, to discussion about what Canadians should consider if we are to thrive as a nation, this year’s Palmer Conference was the brainchild of Mr. McIntosh.

David Bulger, an actor in several Watermark productions, observed that McIntosh is a master at building enthusiasm and collegial atmosphere within a theatre company. “Watermark was the best place I had ever worked at in my many years, and that it was owing to Duncan’s ability to create a positive working and learning environment”, he said.

The Duncan McIntosh Stage will be a reminder for future casts, crews and audiences of Mr. McIntosh’s remarkable legacy. Without a doubt, his artistic vision will continue to touch others for years to come.