Five minutes before the smoky cool of Nick Doneff, the high energy of Ben Atken, and the irreverent cool of Dylan Menzie at the Watermark Theatre’s Classic Music Reignited.

The music of Canadian iconic bands Barenaked Ladies, April Wine, and The Band, performed by Nick Doneff, Ben Atken, and Dylan Menzie, tonight at the Watermark Theatre at 7:30 PM, rain or shine. Rob Oakie is the curator of the summer concert series. 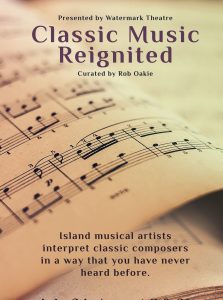 November is the busiest touring month in many artists’ calendars, and Confederation Centre will see 16 different performances over a jam-packed few weeks for Sobeys LIVE @ the Centre.

The Homburg Theatre hosts virtuosic violinist James Ehnes tomorrow, November 2 for a performance the Ottawa Citizen has called “the very best kind of chamber music experience.” This Grammy Award and 10-time JUNO-winning artist is considered one of the world’s finest violinists and to celebrate turning 40, he is throwing a super-sized birthday party in the form of a national tour. Joined by acclaimed pianist Andrew Armstrong, they will perform ‘Stream of Limelight,’ by Bramwell Tovey, Handel’s ‘Sonata in D major,’ Beethoven’s ‘Spring’ Sonata, and a selection of dazzling pieces that are sure to bring down the house at the Homburg Theatre.

On the other side of the sonic spectrum, Canadian mainstays Theory Of A Deadman have been a major force in rock’n’roll for more than 15 years, touring the world and sharing the stage with everyone from Godsmack to Daughtry, to Nickelback and Mötley Crüe. The Delta, British Columbia-spawned band have the ability to transform their set into an acoustic landscape as well, maintaining the emotional intensity and timbre of their biggest hits. The road warriors visit the Homburg on November 17, playing selections from six different albums.

The Mack will also be busy in November welcoming P.E.I.’s rising star Dylan Menzie on the 12th for his first headlining performance since he released his full length album Adolescent Nature this summer. Fellow East Coast songwriter, Christina Martin returns to The Mack on November 19 while November 18 boasts two shows LIVE @ the Centre: Jill Barber and brother Matthew Barber bring their siblings tour for The Family Album to the main stage that night, while The Mack hosts Clip!, a must-see comedy performance from circus artist, Philippe Trépanier

Clip! is a clown solo show aimed at a young audience, from 4 to 101 — the young at heart. Philippe plays an employee in a theatre preparing for a major international conference. He is constantly distracted from his task, attracted by the only thing that interests him: playing. Playing in a theatre, playing at being a guest speaker, playing with a diabolo, playing the video producer. Will someone finally discover his many talents or will Philippe ‘drop the ball?’

On November 25, the Centre will host its most significant dance performance of the 2016-17 LIVE calendar. Out Innerspace Dance Theatre is a Vancouver-based contemporary company dedicated to the creation of innovative and integral dance works. Major Motion Picture explores timely themes of surveillance, otherness, propaganda and belief through eccentric characters. “The dancing is athletic, satisfying and accomplished,” says a recent Times Colonist review. “You will see things that you have never experienced before – abstract, visceral and challenging – this is bold and exciting contemporary dance.”

For the full Sobeys LIVE @ the Centre calendar, visit confederationcentre.com or drop by the box office. Confederation Centre wishes to recognize the Department of Canadian Heritage, the Government of P.E.I., and the City of Charlottetown for their continued support. Media sponsors are The Guardian, Hot 105.5, and Ocean 100.

Harbourfront’s new Backstage Pass Series offers a unique format with the entire show, audience included, happening on the stage. Seating will be cabaret style in a cozy and interactive setting with a panoramic view of the theatre in the background. Featuring a number of musical genres, expect to see some new faces to Harbourfront as well as some past artists returning for this series.

With his compelling, sprawling vocal range, a striking mix of familiar yet sophisticated musical lines and adept guitar skills, Dylan Menzie is quickly becoming one of Prince Edward Island’s prime exports. Hailing from Belle River, PEI, Menzie has been compared to Joel Plaskett and was highly praised by Canadian singer-songwriter, Ron Sexmith, when he opened for Sexsmith at the PEI Jazz n’ Blues Festival, 2014.

Dylan Menzie appears at the Harbourfront Theatre on Wednesday, July 20, at 7:30 PM.