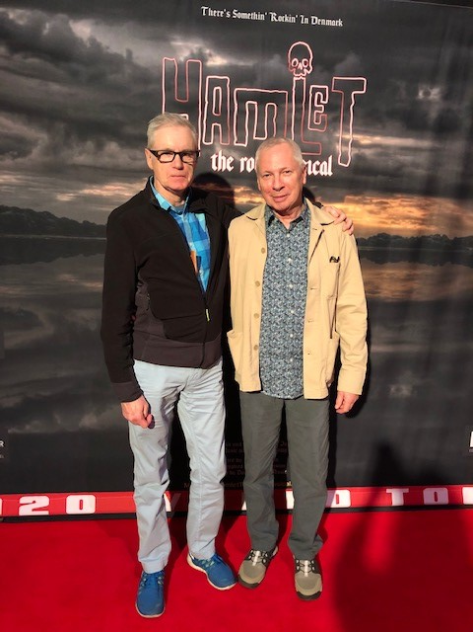 Longtime Centre member, Grant Honeyman, recently told us this full-circle story about his parallel journey with ‘Kronborg: The Hamlet Rock Musical,’ and we had to share.

“I was an usher at the Centre in 1974 when ‘Kronborg’ opened. I was the front of house manager in 1975 when they were in rehearsals for Broadway (and I sat in the back a lot of mornings and afternoons watching those rehearsals).

Then came Adam [Brazier]’s brilliant concert revival at Indian River in 2017 with Mary Francis [Moore] directing, and Craig Fair’s splendid reorchestrations. I got to speak to Cliff Jones for the first time in more than 40 years. And see so many of the people who were involved with the show in 74-75. My partner Stephen (not really a musical fan) was totally enraptured with it. Then I managed to get two tickets for the restaging during the Theatre Conference a few days later in the Homburg Theatre.

Last Festival season [when Kronborg took the Centre’s Mainstage for a three-week run], Stephen took in the show five times. It was six for me. Loved the reworking of it, the updated and improved music, the simplicity of the set and costumes, Mary Francis’ excellent direction and the outstanding performances of the cast.

When I woke up [on February 10th], Stephen said to me ”you know ‘Hamlet – The Rock Musical’ opens next week in Los Angeles.”

Soooo…Los Angeles seemed the (il)logical(?) thing to do. So off we went!”

Grant sent us these wonderful photos from their trip to LA’s El Portal Theatre last month for the 3rd evening of Hamlet – The Rock Musical’s week-long run. Truly full-circle!

Created by Cliff Jones, Kronborg—The Hamlet Rock Musical first debuted at The Charlottetown Festival in 1974. The rock musical went on to take the nation by storm in the 1970’s and later became the first Canadian musical to play on Broadway; with a month-long engagement as ‘Rockabye Hamlet’ (1976), and later a 14-month run in L.A. in the early ‘80s as ‘Something’s Rockin in Denmark.’

Kronborg was given a new lease on life in 2017, when it was turned into a sold-out concert performance at the Historic St. Mary’s Church in Indian River, P.E.I.

In 2019, 45 years since it was first produced, Kronborg returned for a Mainstage run at Confederation Centre, reimagined and reorchestrated by Director Mary Francis Moore and Musical Director Craig Fair.

Following this run, David Carver Music acquired the world-wide touring rights to the acclaimed musical, with plans to bring it to stages throughout Canada, Australia, the U.K., and the U.S.