Menopause can be a difficult time in woman’s life. Hot flashes and night sweats can be annoying, but finding the humour in the experience can make it a little bit better. That is where Menopause The Musical comes in. It’s a show that celebrates women on the brink of “the change” and those who’ve survived it. 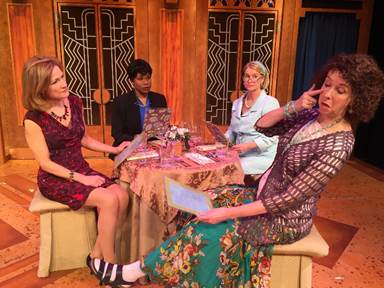 Set in a department store, four women with nothing in common but a black lace bra come to realize that they have more to share than ever imagined. This off-Broadway sensation uses musical parodies to help bring a comedic spin to an otherwise serious topic. The show takes liberties with classic hits – turning the Bee Gees’ Staying Alive into Staying Awake – and audiences will leave with their faces hurting from laughing so much.

Co-producer Mark Zimmerman describes why there is a need to have a musical about menopause, “At one time this is a topic that people didn’t discuss, but we bring it to life with this show through comedy.” Zimmerman goes on to explain, “By the end, the women in the audience form a sisterhood.”

Spoiler alert…the cast invites all women to come up at the end of the show to participate in a kick line which is supposed to represent the women joining a sisterhood.

“The show was actually created from a hot flash and a bottle of wine,” laughs Janet Martin, Co-producer and cast member. “The show’s writer, Jeanie Linders, had a hot flash one night while drinking a bottle of wine with some girlfriends, they started discussing ‘the change’ and so from there she decided to write Menopause The Musical.”

Over the 11 years that Zimmerman and Martin have been involved in this show they’re still amazed at the absolute joy they see on the faces in the audiences.

And they insist that the show is also MAN-datory viewing for men.

“Men leave the show with a new perspective and new appreciation for what their partner is going through,” says Zimmerman. “Couples that do come seem to walk out of the show closer and happier.”

Martin ends by saying, “Laugher is healing and the show is relatable. It’s so exhilarating for me to see the standing ovations at the end of the night and to know that I brought a lot of happiness to women.”

This hilarious musical parody staged to classic tunes from the ’60s, ’70s and ’80s will have you cheering and dancing in the aisles. Join us on November 25 @7:30 in the Homburg Theatre.