In honour of Sir Wilfrid Laurier’s 175th birthday, Confederation Centre of the Arts is launching an original theatre production, The Laurier Project, which opens tonight in Charlottetown, the first performance in a national tour.

Presented in partnership with Theatre New Brunswick, this new show is an inspirational blend of movement and sound and an exploration of Laurier’s words, ideas, and passion for Canada told by a multicultural cast of Canadian performers. This CN-sponsored production is set to music composed by violinist Deanna Choi, and choreographed by Kerry Gage, highlights the transformative words of Laurier in a bold new way.

“Sir Wilfrid Laurier was a great statesman who led Canada through its most formative years,” says Sean Finn, CN Executive Vice-President, Corporate Services, and Chief Legal Officer. “He was a leader ahead of his time. He saw the railway as instrumental in tying the country together and as the key to building strong communities. CN is excited to sponsor The Laurier Project as it represents the first step in Canada’s 150th anniversary celebrations, exploring the nation’s shared history and our bold future ahead.”

Sir Wilfrid Laurier was Canada’s seventh prime minister and the country’s first francophone prime minister. A champion of the Quebec-Canada partnership, he served in the House of Commons for 45 years and is the longest serving leader of a major political party

The Laurier Project cast is made up of five Canadians from diverse backgrounds and Laurier’s vision for an inclusive country resonates: “His fairness and willingness to embrace all people stands out,” states one company member. The cast includes Byron Abalos, Christy Adamson, Emily Barker, Devon Michael Brown, and Ayesha Mansur Gonsalves.

“We are thrilled to be partnering with CN to present this exciting, original theatre piece celebrating the legacy of Sir Wilfrid Laurier,” says Jessie Inman, CEO, Confederation Centre. “Through CN’s support of this heritage initiative and others, such as our Confederation Players Program, we are together able to commemorate Canada’s 150th anniversary and ongoing evolution as a nation.”

The Laurier Project tour kicks off in Charlottetown tonight before being presented in six Canadian cities, concluding November 18 in Edmonton.

The Laurier Project invites Canadians from across the country to follow the discussion at lauriertour.ca and to share their thoughts on what Laurier and Canada’s cultural identity means to them on social media using the hashtag #lauriertour2016.

Through lively song, stories, and dance, the 2016 Confederation Centre Young Company is proud to present The Voices of Canada until Saturday, August 20.

This high-energy celebration weaves song, dance, and legend into a stunning kaleidoscope of movement and colour, offered by donation, six days a week at Confederation Centre. The Voices of Canada is sponsored by TD Bank and this year’s musical includes song selections from Stan Rogers, Gordon Lightfoot, Serena Ryder, The Trews, Great Big Sea, The Guess Who, and more.

First established at the Centre in 1993, the Young Company is theatre training program for emerging performers from across Canada. The summer program includes vocal, dance, and acting training as well professional development towards auditioning, best practices, workshopping new theatre, and much more.

23 Canadian triple-threats, a world-class theatre, a mesmerizing pop-rock soundtrack, and a trip down the aisle you’ll never forget. It all culminates Saturday night when The Charlottetown Festival launches the Atlantic Canadian premiere of Mamma Mia! 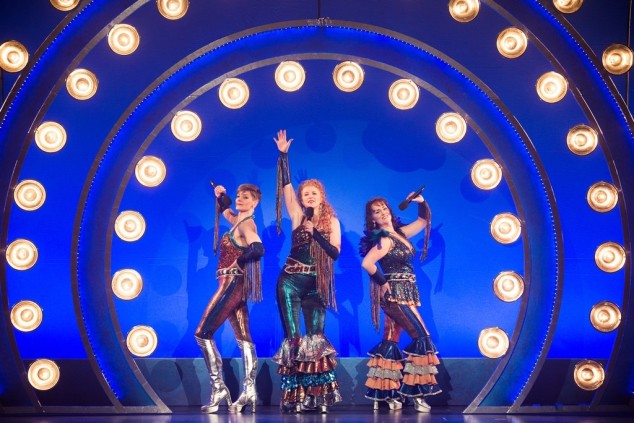 Over 60 million people have fallen in love with the characters, story, and absorbing music that make Mamma Mia! the ultimate feel-good musical. This sunny tale unfolds on a Greek island paradise where on the eve of her wedding, a daughter’s quest to find her father brings three men from her mother’s past back to the island.

The Charlottetown Festival is presented by CIBC. The Centre wishes to recognize Tim Hortons as the title sponsor for Mamma Mia! and acknowledge the Department of Canadian Heritage, the Government of P.E.I., and the City of Charlottetown for their continued support. Media sponsors are The Guardian, Hot 105.5, Ocean 100, and CTV.

It’s an early start to the season for the cast and crew of The Charlottetown Festival. Rehearsals kicked off last week for the P.E.I. theatre event of the year — Mamma Mia!, opening June 1 in the Homburg Theatre.

Complete casting has been announced for the mega-musical, which stars Eliza-Jane Scott and Katie Kerr as a mother and daughter on the eve of Sophie’s wedding. Sophie (Kerr) wants her father to give her away, and having read her mother Donna’s diary, secretly invites three guests to the wedding, bringing back three men from Donna’s past to the paradise they last visited 20 years ago. The three gents are: Irish-American architect Sam Carmichael (Réjean Cournoyer), Australian adventurer Bill Anderson (Stephen Guy-
McGrath), and British banker Harry Bright (Cam MacDuffee).

Local audiences are acquainted with all three, with Guy-McGrath appearing as the fiddle-playing René in last fall’s Evangeline and Cournoyer playing the villainous Hampson in that show as well as the White King in Alice Through the Looking-Glass. MacDuffee starred in Ring of Fire and Dear Johnny Deere, and toured with Cournoyer for the Centre’s 2015 production, The Founding Father.

For a limited time only, the Festival is offering 20% off performances in the month of June. Use promo code ABBA when contacting the box office online, in person, or via phone. This offer runs from May 21 to 28, applies to Tier-1 and 2 seating only, and is not valid with any other promotion.

“I have seen a lot of theatre in my short 41 years,” says Artistic Director, Adam Brazier. “Never have I seen a party and celebration the likes of Mamma Mia! This show redefined the modern musical and set in motion the success of other jukebox hits like Jersey Boys, We Will Rock You, and Ring of Fire. This pop fable leaves the audience laughing and dancing in the aisles. Somewhere in the crowd there’s you. Join us on a nostalgic journey through the guiltiest pleasure of the summer.” Brazier is joined by Bob Foster, musical director, and Kerry Gage, choreographer.

The complete cast in alphabetical order is: