While Anne of Green Gables—The Musical™ is enjoying the first of a three-year revival in the Homburg Theatre, many changes are happening behind the scenes. Following the addition of new leads, sets, and costumes, a sweeping new sound design has been introduced and the harp has been returned to the orchestra for the first time in years. 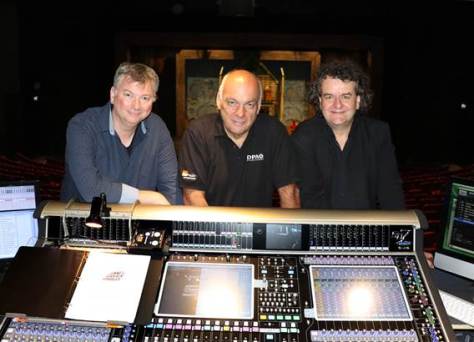 When asked to instill a new life into the musical’s score, Festival Music Director Bob Foster went right to the harp, bringing in Janice Lindskoog for a total of 14 orchestra members. “In many ways, the harp is the musical heart of the sound and is a most beautifully written part,” he says. “Just adding it back in has made a huge difference to the sound in the pit and on stage.”

For her part, Lindskoog is thrilled to return, having played with the Festival from 2005-11, including a tour to Toronto. “Every harpist will bring their own personality and interpretation to the score, which is charming and timeless,” she offers. “I play the imaginative orchestrations by John Fenwick, which contribute special colours and allow for musical expression in the accompaniment of the voice.”

adaThe musical world has changed a lot since Anne™ first premiered, and so has the listener’s ear. With advanced systems in every home now, a certain quality has become normalized, and a theatre can no longer rely only on its acoustic sound. Foster and Director Adam Brazier brought in Peter McBoyle, a sound design expert of great renown to help with this industry shift.

“Alongside Kevin MacLean, Head of Audio, and the new advanced equipment at the Centre, we are on our way to bringing the sound of this musical up to date, “ says Foster. “I also give great thanks to the fine musicians in the pit who have helped breathe new life into this national treasure.”

McBoyle desired to present the score in a richer way and bring out the nuances in the strings and the woodwinds. He also wanted to clarify the actors’ mics, so that every lyric would be heard crisply. “I wanted to achieve all of this in a way that sounds natural and that doesn’t call attention to itself,” explains the designer. “Ideally the audience would never know that the sound they are hearing is coming from speakers.”

One challenge was the large number of hats worn this year. “This can make it tricky to get a good mic position and good sound from the performer,” says McBoyle. “The sound reflects off the hat and makes a great mic sound not as sharp as it could be. Theatre is always a combination of collaboration and compromise though and we found ways to work things out.”

“Sonically, the funeral procession in Act 2 is something I am most proud of,” he reflects. “The orchestration is really something special and the addition of a little bit of rain and a distant thunder makes it beautiful, sad, and thoughtful all at once.”

“Of course, adding the live harp back in to the pit was a great decision for a variety of reasons and I’ve developed a mic technique that really makes the harp sound full and dynamic and so, given that it was an important part of the reinvention of this show, I am very happy with how it sounds in the mix.”

Patrons can hear and see Anne™ in the Homburg Theatre until September 23, 2017. Special thanks are extended to the Government of Canada for their support of Confederation Centre; and The Charlottetown Festival title sponsor, CIBC and production sponsor RE/MAX Charlottetown.  Appreciation is extended to media sponsors Ocean 100, Hot 105.5, CTV, and The Guardian.

I was a little early getting to Victoria Playhouse on Wednesday evening & ran into Pat Stunden Smith who in recent years has taken on more of a creative role along with her Executive Directing duties. She paid tribute to Norm Foster, most successful playwright in Canada, whose scripts are accessible & humourous. She described Director Ted Price (introduced to her by 2012s On Golden Pond lead Bill McFadyen) as a gift to the Theatre & along with his wife & Rehearsal Stage Manager Anne Laughlin represent a dying breed as far as work ethic & dedication. “You can see his sensibility to leave an audience feeling entertained & that they’ve learned something”. Production Stage Manager Kevin MacLeod was also on hand in the front of the Playhouse entrance to warn me to have some Kleenex on hand for the second act, to that I responded that “the only time I cry’s when I’m pluckin’ them noticeable hairs out my nose”.

From the get go the The Melville Boys was rife with laughter! Out comes a rootin’ tootin’, beer-guzzlin’, gun-totin’, gettin’-away-from-it-allin’ Owen (Jeremie Saunders star of Kiss the Moon, Kiss the Sun, Gemini Award winning kids TV show Artzooka!, & co-creator & co-host of Sickboy Podcast as well as husband to Actress Bryde MacLean who stars in Watermark’s Blithe Spirit) bursts on to the stage with a mean John Wayne impersonation. As far as good, clean (sometimes getting a little on the naughty side, but definitely nothing R rated) high energy comedy goes, Jeremie Saunders has taken his game to a whole new level & might just be the front runner on PEI this year. His performance, especially in Act 1 is over-flowing with humor as he absolutely hauls laughter from the crowd as if he were nitrous oxide personified.

The more reserved of the Melville bros, Corey Turner (who has studied theatre at Studio 58 in Vancouver, UBC, & York University in Toronto has worked with Ted Price at Theatre Northwest & has been active in TV & film as well), plays Lee & he puts on some funny displays of self-deprecating dimwittedness & moments of embarrassment. He was the ultimate set-up man and wing-man for Saunders on this log-cabin get away but he had a serious challenge to face & showed a wide range of emotion as he reached out to the others about the fear he has been recently been forced to face.

The 2 ladies of the cast steal the show by times as well. Star in the making, Loretta (Holland College SOPA grad, Rebecca Griffin, who reunites with Saunders for the first time since another Norm Foster gem Kiss the Moon, Kiss the Sun in 2014) shows off her acting chops as she re-enacts a car commercial in a very over the top manner. Her sister, the self-proclaimed original nice girl, Mary (Helen Killorn, whose recent favourite credits include: Love & Marriage & The 25th Annual Putnam County Spelling Bee at King’s Playhouse) was cute as a button as she lamented on her baking skills & put on the funniest display of torrential bawling I’ve ever seen. I’m pretty sure the rest of the audience would totally agree that her crying scene was something to remember. I was most impressed with the line one of the sisters (I believe it was Griffin, but I could be wrong) declared, “It wouldn’t be a dream if it wasn’t out of reach”, which to me was such a statement of what drives people to make the impossible a reality in our on-going collective evolution.

I loved the set designed by W. Scott MacConnell featured the interior of a cozy, 2 level cabin in the woods so realistic with its water view out the window & plenty of room for the cast of 4 to roam for some impressive comedic pairings. Seamless lighting cues (compliments of David Nicholson who according to the program holds the philosophy, “Every show is another opportunity to create living, breathing magic”. And dedicates his work at the Playhouse , with gratitude, to the memory of Erskine Smith) made the look of this production do justice to it’s splendid acting.

Without getting into a spoiler scenario, the script in the second set gets down into the harsh realities of impermanence & how hard it is to make a relationship work after the honeymoon stage has come & gone. We’re talking about a proven formula that Norm Foster & many other great playwrights can’t resist. It works well & has been used time and again in theatre as well as Hollywood. Like I’ve pointed out in past reviews from other shows across the Island, I personally would’ve enjoyed more laughter at the forefront again (I’m more of a comedy junkie who doesn’t have as much of a thirst for tears & heartache), although I admit, it might’ve been at the detriment of emotional impact & time constraints.

As I walked past the back door when I left I heard many excited audience members raving to the cast about how much they loved the performance, which must’ve meant so much after the hard work getting a show like that ready would’ve taken. It’s lots of fun onstage in that scenic little village of Victoria by The Sea & I think it’s pretty safe to say in this 35th season, performances like these should keep PEI’s Longest Running Little Theatre going for many years to come!