A Misfortune makes its world premiere tonight at The Charlottetown Festival.Sponsored by Key Murray Law, the bittersweet Canadian musical is playing a short run at the Centre’s cabaret theatre, The Mack until Sept 22. 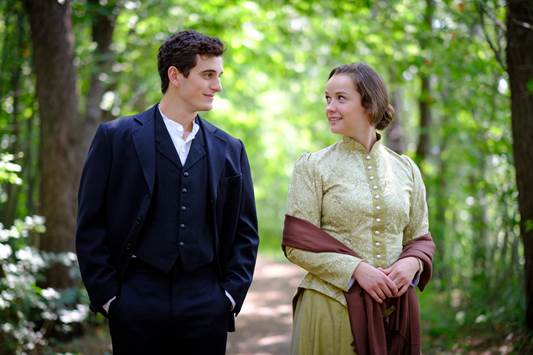 Adapted from a short story by Anton Chekhov, the musical starts with two old friends going for a walk in the woods. Their conversation soon takes a turn, revealing hidden depths to their relationship and forcing them to question the lives they’ve chosen.

“Despite being written over a hundred years ago, the play’s themes are timeless,” says Kevin Michael Shea, scriptwriter and musical co-creator. “We’ve all loved the wrong people, or not loved the right people enough.”

A Misfortune promises audiences a romantic, bittersweet musical about small moments and momentous decisions. Set at a dinner party among friends, sordid secrets are revealed with every shot of vodka.

Confederation Centre will present only nine performances of A Misfortune, so get your tickets for this must-see show. Please visit: http://www.confederationcentre.com/en/show/350-A-Misfortune

A Misfortune is directed by Eliza-Jane Scott with music by Scott Christian and lyrics by Wade Bogert-O’Brien.

Special thanks are extended to the Government of Canada for their support of Confederation Centre and to The Charlottetown Festival title sponsor, CIBC. Appreciation is extended to media sponsors Ocean 100, Hot 105.5, CTV, and The Guardian.

The Charlottetown Festival is in top gear this month, and producers are already preparing for the next round of productions, including the world premiere of A Misfortune, sponsored by Key Murray Law.

The bittersweet Canadian musical plays a short run from September 7-22 at Confederation Centre’s cabaret theatre, The Mack. With just nine performances on deck, blink and you may miss it, so this is one theatre event to circle on the calendar.

A Misfortune follows Ivan, a young lawyer (Connor Lucas) and Sofya, a married woman (Kelsey Falconer), in pre-revolutionary Russia on a walk through the woods; their friendship has reached an impasse.

Soon they gather with three friends (Réjean Cournoyer, Brendan Wall, and Melanie Phillipson) for a dinner party in the country. With each drink, more sordid secrets are revealed. Adapted from a short story by Anton Chekhov, one of the world’s most celebrated and enduring writers, A Misfortune is a romantic, darkly comedic musical about small moments and momentous decisions. We follow Sofya’s journey from innocence and youth towards knowledge and self-actualization.

A Misfortune is directed by Festival alumna Eliza-Jane Scott, who wowed audiences in Mamma Mia! last year, and recently landed a lead role in the musical phenomenon, Come From Away, playing this winter with Mirvish.

A Sheridan College graduate, Lucas is currently performing in the Adam Brazier-led revival of Anne of Green Gables–The Musical™ and also appeared in two previous Young Company productions, The Voices of Canada and We Are Canadian. Falconer is playing Josie Pye in Anne™ as well this summer and is a recent graduate of the Royal Conservatoire of Scotland. The Blyth, Ontario native has performed at the Edinburgh Fringe as well as in workshops for the hit Proclaimers musical, Sunshine on Leith.

Cournoyer is a household name at the Festival, having starred in Mamma Mia! last year, as well as memorable roles in Evangeline, Alice Through the Looking-Glass, The Founding Father, and Anne™.

Wall performed here last year in the acclaimed Festival/Soulpepper musical Spoon River. He is currently appearing with Soulpepper’s Festival in New York City, in Of Human Bondage and Spoon River, which is drawing international attention and strong reviews, including from the New York Times. Wall has also performed in the award-winning War Horse (West End and Mirvish) and Once (Mirvish).

Phillipson is also presently performing in Anne™, and made her Festival debut in last year’s Belles Soeurs: The Musical. The Moose Jaw native has appeared across Canada with Mirvish, Tarragon, and seven seasons at the Shaw Festival.

Scott Christian is the musical’s composer, orchestrator, and music director with lyrics from Wade Bogert-O’Brien, and book and additional lyrics by Kevin Michael Shea.

Special thanks are extended to the Government of Canada for their support of Confederation Centre; and to The Charlottetown Festival title sponsor, CIBC. Appreciation is extended to media sponsors Ocean 100, Hot 105.5, CTV, and The Guardian.