The PEI Photo Club will be hosting their 37th annual print exhibition at the Gallery @ The Guild from June 12 to 23. The public is invited to attend the grand opening on Wednesday, June 12 at 7 pm.

There’s something new about the exhibition this year. The images won’t be grouped according to categories such as landscapes, people, and nature as they have had been in years past. Rather, exhibition spaces will be dedicated to the
photographers who will be showcasing their work. The theme of the 2019 show is “Through My Mind’s Eye,” and club members have been encouraged to submit small collections of related images.

“The annual photo show is evolving,” says club president, Paul Vreeland. “Last year’s show was a first in that it wasn’t a competition with judges and prizes. We wanted it to reflect who we are as a community of photographers. This year, we
hope that each member’s collection will say something about the photographer and give more credit to him or her, rather than to a singular, prize-winning photo.
The show also encourages us to think in terms of working on creative projects.”

Everyone is invited to see the show during gallery hours which are Monday to Saturday from 12 to 5 and one hour before show times. The PEI Photo Club is grateful to all of the volunteers who make the show possible.

PEI Theatre is the Guild, Harbourfront Theatre,
Confederation Centre for the Arts,
Watermark Theatre, and the Victoria Playhouse
PEI Photo Club 36th Annual Print Show
April 18, 2018
The PEI Photo Club will be holding their 36th annual print show at the Gallery @ The Guild from April 18 to 29. Everyone is invited to attend the grand opening on Wednesday, April 18 beginning at 7 pm.

This year’s show has taken a different approach from previous years.
Rather than holding a competition with judges, sponsors and prizes, this show will simply showcase the work of the many talented club members.
“We wanted this year’s show to be more a reflection of who we are as a community of photographers says club president, Paul Vreeland. No winners, no losers. Just an exhibition of what we’re all about.”

There will be four broad categories in the show this year, including landscape, people, nature, and photographer’s choice. The executive of the PEI Photo Club have been working to encourage the greatest possible participation.  According to Rick Dunphy, chair of the Photo Show Committee, “We have been helping members select
and edit their best images. We want everyone to be happy about their contributions and to celebrate their accomplishments. I think that’s what this year’s show is really all about.”

Everyone is invited to visit the print show during gallery hours (check www.theguildpei.com for information) and to vote for your favourite photo.
The PEI Photo Club is grateful to all of the volunteers who make this show possible.
For more information please check www.peiphotoclub.com.

The PEI Photo Club has undergone several incarnations. The first Camera Club, organized by Roland Taylor in 1937, was short-lived. With the help of Vic Runtz, Roland organized the Charlottetown Camera Club after the end of World War II and supported it for many years. The club currently presents an annual Roland Taylor Award in his honour. The club saw a new birth in 1982 as the Monday Night Club, but the name didn’t stick so the group called itself the PEI Photo Club. 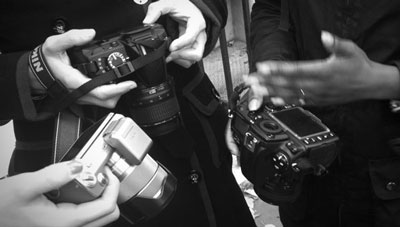 Richard Carson writes: “The ‘pros’ like Carmen Paynter of the PEI Photo Lab, Rollie Taylor of Taylor’s Jewellers who sold Minoltas, and George Wotton were a great help to the members in the early years of the new club.”

Over the years, the Club has benefited from the membership of a Who’s-Who of Island business owners, teachers and commercial photographers, and today it is proud of the diversity of its members ranging from high school students to retirees, from those using point-and-shoot cameras to those who have invested in professional gear.

The 34th Annual PEI Photo Club Print Show opens at the Guild on June 8th. The photo club is grateful to all of the sponsors and volunteers who make this show possible.