The artists and staff of the Watermark Theatre on the coast of North Rustico believe our province is a better place to live in and visit because it has a fine classical theatre company. Programs for students, seniors, summer residents, visitors and residents enrich and support our lives. They give us access to some of the greatest thinkers in history, thrilling art work and stories from our own rich history.

We believe that this excellent art work should be available at a low price so that everyone who wants to enjoy it can. To provide this access, community members volunteer time and donate money, staff and management work for minimum wage or honorariums, volunteer time and donate money; professional artists from across Canada provide top class work for minimum wages.

The Watermark Theatre produces the finest professional classical theatre in P.E.I. You’ll find the greatest works of English, American, and European Literature on our intimate thrust stage in North Rustico, all at incredibly affordable prices.

Harbourfront Theatre opened its doors in 1996, the result of more than a decade of tireless effort on the part of a group of Summerside citizens with a vision to create a state of the art, multi purpose performing arts facility in Prince County. The theatre, along with the Eptek Art & Culture Centre and the Summerside Visitor Information Centre, is housed in The Wyatt Centre, aptly named after one of the facility’s major contributors, Dr. Wanda Wyatt. 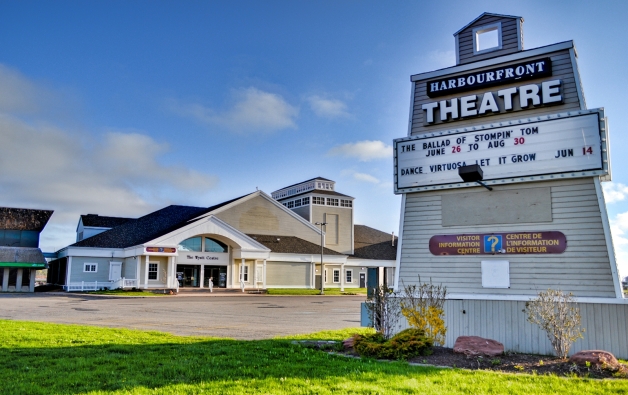 Harbourfront Theatre is owned by Regional Cultural Events Centre Inc., a registered non-profit organization managed by a board of directors, general manager, and director of operations, and boasts a friendly, knowledgeable, professional staff and a dedicated core of over 90 volunteers.

Its mission is “to provide a continuous live entertainment service to the Prince Edward Island community and its visitors, featuring both local and touring productions, while being a significant driving force within the community to encourage and nurture the development and appreciation of the performing arts.”

The facility is ideally suited to a myriad of uses, including plays, concerts, opera, ballet, comedy & magic shows, conferences, seminars, receptions, business mixers, trade shows and public forums. Beautifully appointed and state of the art equipped, the Harbourfront Theatre represents the best of both worlds – large enough to host renowned touring acts, yet small enough so that every one of its 527 seats captures a uniquely intimate performer/audience experience.

The Victoria Playhouse Inc., located in the beautiful village of Victoria by the Sea, Prince Edward Island, was formed in 1981, when residents voted to encourage the production of live theatre in their community hall. It was recognized the presence of the theatre contributed to the quality of life and the social and economic vitality of the community.

The Victoria Playhouse Inc. is a registered not-for-profit organization and is managed by a five-member Board of Directors, an Artistic Programming Committee and a Managing Director. The company has produced thirty-four seasons of live theatre and performance events emphasizing contemporary Canadian plays and music. On average the Playhouse presents over eighty performances a year and during the peak season (July through September) operates seven days a week.

The historic Victoria Hall, located at the exact centre of the village is home to the Victoria Playhouse Inc. The building was constructed between 1912-1915 and is widely known for its intimate interior, excellent acoustics and air conditioning! In 2007 the Hall was designated a ‘Historic Place’ on the Canadian Register of Historic Places. The Hall has been the heart of the community for nearly one hundred years and continues to bring people together, from near and far, to share in the magic of live performance.

Rounding out the 2016 season at the Victoria Theatre, Chris Gibbs, who opened for the sold out run of Cathy Jones’ Stranger to Hard Work last summer, returns in September with his own comedy show. Like Father, Like Son?

Sorry took the award for Patron’s Pick at the Toronto Fringe Festival and has played to sold out houses across Canada. The show playfully explores the fears, worries and surprises of being a new father, and the absolute terror of wanting to be a good one.

This popular show has presented some of PEI’s top country artists for the past 4 years. Opening the show will be 3 nominees for Music PEI’s Country Recording of the Year. Kelley Mooney, Dan Currie and Johnny Oliver will perform in a songwriters’ circle.

The second half of the show will be a special PEI Country Legends Tribute featuring Neil Matthews, Lester MacPherson and more.

The Country Jubilee appears at the Harbourfront Theatre on May 20th at 7:30 PM.

A tiny land, on the outer lip of the known universe. A changing time, with empires flattening all places into one. And a scrappy group of misfits, who unite to fight a future they don’t even recognize yet. 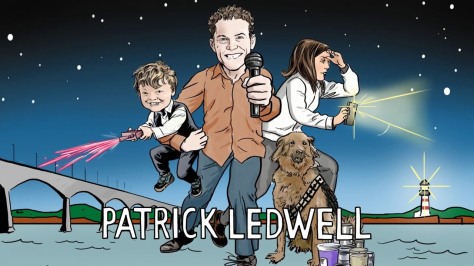 Sound familiar? That’s because we are describing Prince Edward Island!

A follow up to his hit book “I Am an Islander”, in his new book “An Islander Strikes Back” Patrick Ledwell sounds a rallying cry for comedic resistance everywhere. Won’t you join him?

Confederation Centre is proud to present the explosive new musical Belles Soeurs: The Musical this September as the closing production of The Charlottetown Festival season. Crackling with electricity and performed by a powerhouse cast and musicians, Belles Sœurs arrives in Charlottetown following stellar reviews and sold-out crowds in Montreal and Ottawa (NAC).

This touching and heartfelt English-language musical is based on Michel Tremblay’s internationally­-celebrated play and is produced by Copa de Oro and the Segal Centre for the Performing Arts. Adapted and directed by René Richard Cyr in collaboration with the award winning duo Neil Bartram and Brian Hill, Tremblay’s tale takes on a whole new dimension in this outrageously fun and comedic musical performed by a powerhouse all-female cast.

“This is a story about family. About a daughter struggling to break free from her overbearing mother, and sisters learning to accept each other for who they are, and not who the other thinks they should be,” says Artistic Director Adam Brazier. “Belles Soeurs is a touching and heartfelt musical comedy straight from the heart of the Canadian spirit and we are thrilled to present it on Prince Edward Island.”

Richly textured and outrageously fun, Belles Sœurs will sweep you through joy and drama, laughs, tears, and the heights and depths of the human condition, all resonating through the medium of the modern musical. Audiences will fall in love with hits such as ‘I Want it All,’ ‘Bingo,’ and ‘Johnny,’ that will have them humming for days.

The Festival is pleased to announce that Dora-Award winning actress Lisa Horner will star as the Montreal housewife Germaine, alongside a stacked ensemble. A celebrated name in Canadian theatre, Horner has performed for Mirvish, Shaw, and Stratford, as well as TV credits on Little Mosque on the Prairie, Wind at My Back, and Road to Avonlea. She won a Dora in 2013 for her role in The Wizard of Oz and is currently in the show’s ensemble at the NAC.

“I am over the moon that I get to play this incredible woman, Germaine!” she offers, “and also to bring this beautiful piece of Canadian theatre to this beautiful Island!”

The Charlottetown Festival is presented by CIBC. Confederation Centre wishes to recognize the Department of Canadian Heritage, the Government of P.E.I., and the City of Charlottetown for their continued support. Media sponsors are The Guardian, Hot 105.5, Ocean 100, and CTV.

One night only, the Confederation Centre Art Gallery will be transformed into a sprawling dance party and showcase of artist creativity for afterimage, an event that animates the gallery at night. This promises to be an unforgettable night in Charlottetown, and a completely new way of experiencing contemporary art in the stunning architecture of the art gallery.

The CCAG is in between exhibition cycles this month, hence the event title; a brief window in time where the gallery will be redefined visually and conceptually. “This will be a truly special night,” says Gallery Director Kevin Rice. “We are excited to bring a new audience into the gallery, to see what an amazing space it is, and experience it in an entirely new way.”

Stretching across multiple galleries – even including a service elevator – afterimage features a variety of artists from P.E.I., New Brunswick, and Nova Scotia and installations ranging from themed spaces, projections, and video works; to live music, guest DJs, and interactive games.

Belfast, P.E.I. painter and media artist Damien Worth is creating an interactive piece that allows users to navigate a virtual landscape. Another featured guest is Montreal’s Pascal Dufaux, who recently relocated his studio to the Guild, known for his interactive sculptures that capture the movements of partygoers through motion sensors. The galleries will also include a dance floor showcasing the music of guest DJs Willow Bell (Whaleskin) and DJ Lucy MOD (Kate Walchuk), as well as performances by Nathan Gill, Andrew Cairns, and some surprise off-Island guests.

afterimage is one night only and runs from 9 p.m. to 1 a.m. on May 13. The entire gallery team as well as other Centre staff and over a dozen artists will be working full tilt to make this an unforgettable combination of party and art experience, and a true showcase of talent from around the region. Event tickets are $20 (plus tax and service fees) in advance, via the Box Office, and $25 (plus tax and service fees) at the door.

Other highlights include an interactive installation dubbed ‘The Glam Bat Cave’ featuring creations by Halifax’s Mitchell Wiebe, and Island artists Ali O’Sullivan and Andrew Cairns, a wheel of prizes hosted by Tamara Steele and Charlottetown comedian Lennie MacPherson, a new projection work from Becka Viau, and a multimedia installation in the gallery elevator designed by Charlottetown’s Monica Lacey and Devon Ross. A more relaxed lounge area with specialty cocktails, a playlist by Colin Buchanan, and a Lucy van Pelt-inspired ‘advice booth’ will contrast the live performance space.

Murray McLauchlan is one of Canada’s most highly regarded singer/songwriters, and with good cause. Over a 40-year career, he has released 18 albums and been awarded 11 Junos. His songs Farmer’s Song, Down by the Henry Moore, Whispering Rain and Sweeping the Spotlight Away are now considered Canadian standards. Murray is also a painter, an author, an actor, a radio host; he’s been bestowed an Honourary Doctor of Laws and appointed to The Order of Canada. That’s quite a ride. Yet some may wonder where he’s been of late.

Murray did tour in support of his 2012 critically acclaimed release Human Writes, but then decided to take a break. Other interests prevailed and he restricted his touring to shows with Lunch At Allen’s, the supergroup he co-founded, whose members also include Ian Thomas, Marc Jordan and Cindy Church.

But now Murray is on the road in his own right once more. Here’s what he has to say: “As a songwriter I know that it’s not enough to sit in your kitchen and write. Your songs need to be heard. Music is a communicative art and if it isn’t brought in front of people there is no way to tell if that end has been met. I like to think of a concert tour as a kind of roving gallery to test your art and your ideas. I try to do my very best to make it worthwhile for folks to be there and to perhaps look at things in a new way when they leave.”

And this, in a nutshell, is the Murray McLauchlan concert experience.

Murray McLaughlan is at the Harbourfront Theatre on May 2nd at 7:30 PM.