This Spring: TRY SOMETHING NEW with a 3-in-1 Package

Three Shows by Three Critically-Acclaimed Creators.
Three Experiences for One Price at the Harbourfront Theatre. 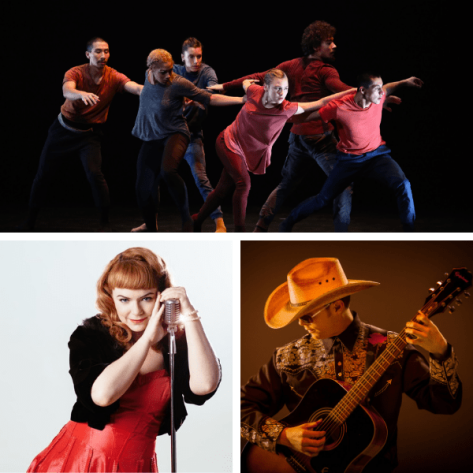 With both humorous and serious moments, Vic’s Mix is a kind of “best of” creation spanning the immense creative territory explored by nationally-awarded choreographer Victor Quijada. RUBBERBANDance Group is characterised by its innovation, its significant contribution in dance, and for its role in the development of a new style inspired by break-dancing, classical ballet, and dance theatre. Learn more.

Rebecca Perry: From Judy to Bette (May 5)

Judy Garland, Bette Davis, Lucille Ball and Betty Hutton: trailblazers who refused to be “just another ingénue” during the golden age of cinema. Critically-acclaimed Toronto creator and performer Rebecca Perry takes to the stage for an evening of scandalous headlines & marvellous melodies to take a look at the lives of the ladies who broke convention and started something bigger than even they knew. Learn more.

40 years ago, a mysterious acoustic guitarist appeared from nowhere, conquered the music industry, and vanished without a trace…until now. Chase Padgett becomes a manager, a mother, a mentor, and the guitar prodigy himself as each one tells their side of the rise, demise, and resurrection of the best damn guitar player you’ve never heard of: the Nashville Hurricane. Learn More.