Come out to the fifth annual event

As part of the 2019 Rendez-vous de la Francophonie, the public is invited to the fifth annual Soup’Art to celebrate International Francophonie Day. This event will take place at Confederation Centre of the Art’s Studio 1, on Wednesday, March 20, from 5 to 7 p.m. 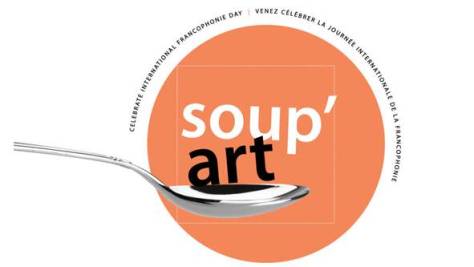 The audience will be served a bevy of delightful soups from many different countries with some gluten-free and vegan options. This experience will be enhanced by a rich exhibition of visual art and crafts created by Island artists and artisans, as well as jazz piano with Todd MacLean and singer-songwriter Fayo.

“SOUP’ART has been tremendously popular. The public enjoyed both the soups and the arts that were on view,” says Monique Lafontaine, French programming and arts education coordinator with the Centre. “This year we are proud to be including a performance by Acadian artist Fayo who now calls P.E.I. home.”

Admission to this event is free and all are welcome. In the spirit of sharing, members of the public are asked to bring cash donation for the Soup Kitchen.

Circle Around the Centre is excited to have Marlane O’Brien and Margie Carmichael as speakers for its third luncheon series. Come on March 14 at noon to Studio 1 for the much see event. 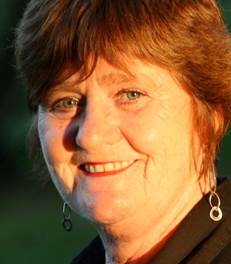 O’Brien and Carmichael will talk about their experience creating Stories from the Red Dirt Road which will make its world premiere at The 2018 Charlottetown Festival.  Adapted by O’Brien from the book “And My Name Is…Stories from The Quilt” by Carmichael, this is a funny, inspiring, heartfelt piece of four Island stories woven together through song and the red dirt road itself that joins our lives together.

Upcoming Speakers: Dean Constable, April 11, speaking on the generational impact of the Centre on Islanders. He will share stories and anecdotes from his own life and career at the Centre, from his days as a toddler wandering backstage, to a dance umbrella student, to the General Manager of Theatre.  Also coming up on May 16: Karen Jans speaking on the Province House conservation process; and on June 13 a tribute to artist Brian Burke

A portion of each ticket purchased will be donated to The Circle Around the Centre Fund of the Confederation Centre of the Arts Foundation. This fund was created by Catherine Hennessey with the purpose to commemorate and celebrate notable individuals and special occasions that have a significant importance or connection to the Centre and its rich history.

For more information, visit the http://www.confederationcentre.com/en/foundation.php

Circle Around the Centre is pleased to welcome Confederation Centre Board Chair Wayne Hambly for the first luncheon in its 2018 series, happening on January 24 at 12:00 p.m. in Studio 1 (located beside Mavor’s).

From January through June, we are hosting the 2018 Circle Around the Centre Luncheon Series. Catherine Hennessey was the driving force behind Confederation Centre’s anniversary series in 2014, and she has some fantastic new ideas for this year. Circle Around the Centre attendees will enjoy a monthly luncheon of sandwich and salad or soup as well as a talk by some of the Island’s most interesting movers and shakers.

An incredibly active force in the Island community, Mr. Hambly is a recipient of both the Order of P.E.I. and of the Order of Canada. He is an Honorary Life Member of the Greater Charlottetown Area Chamber of Commerce, an inductee to the PEI Business Hall of Fame, and he has received countless other awards and accolades in recognition of his lifelong hard work and dedication to his community. Mr. Hambly will speak on his past 25 years as Chair of Confederation Centre’s Board, and his thoughts and hopes about moving into the future.

A portion of each ticket purchased to these events will be donated to The Circle Around the Centre Fund of the Confederation Centre of the Arts Foundation. This Fund was created by Ms. Hennessey with the purpose to commemorate and celebrate notable individuals and special occasions that have a significant importance or connection to the Centre and its rich history. For more information on the Fund visit http://www.confederationcentre.com/en/foundation.php

Premiering July 13, The Charlottetown Festival is proud to present a new production of the cabaret musical which charmed Islanders and tourists alike last summer. Glenda Landry returns with new songs, stories and her talented musical kitchen party team, as Glenda’s Kitchen cooks up the best kind of seafood chowder, a bowl with a story behind it! 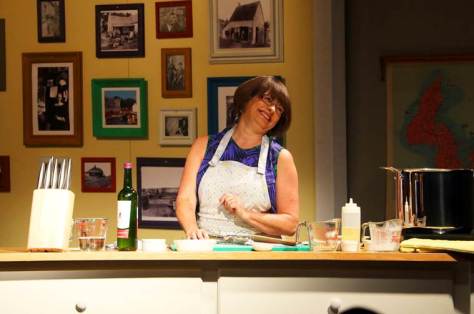 Directed by Festival favourite Wade Lynch, Glenda’s Kitchen plays in Studio 1 at Confederation Centre of the Arts on Monday, Tuesday, Thursday, and Friday at 1:30 p.m. until September 1.

Led by Island theatre icon, Glenda Landry, the 75-minute production offers a taste of the Island, literally and culturally, including a plated bowl of chowder for each patron. This afternoon cabaret features new tunes and tales from Glenda, her band, and a stacked cast of Festival all-stars. Landry and the ensemble explore the many bounties of P.E.I.’s people, traditions, and world-famous food.

Landry is an accomplished chef, motivational speaker, and actor, having performed in Anne of Green Gables—The Musical™for many summers, as well as memorable roles in Sound of Music and Oliver! at the Capitol Theatre, and Wizard of Oz, The Full Monty, and the world premiere of Evangeline at the Centre.

She is joined at the table by Hank Stinson, Marlane O’Brien, Julain Molnar, Cameron MacDuffee, Scott Christian andKaren Graves. Husband and wife team MacDuffee and Graves will provide the musical accompaniment alongside Christian, who serves as musical director for the production. The light-hearted musical is sponsored by the PEI Fishermen’s Association with kitchen products courtesy The Kitchen Store.

Special thanks are extended to the Government of Canada for their support of Confederation Centre; production sponsor, Tim Horton’s; and The Charlottetown Festival sponsor, CIBC. Appreciation is extended to media sponsors Ocean 100, Hot 105.5, CTV, and The Guardian.

As part of the 2017 Rendez-vous de la Francophonie and International Francophonie Day, the public is invited to the fourth annual edition of SOUP’ART at Confederation Centre of the Arts. This event will take place in Studio 1, Monday, March 20, from 5 to 7 p.m.

The audience will be served a bevy of delightful soups from many different countries, with gluten free and vegetarian options available. This experience will be enhanced by a rich exhibition of visual art from the Acadian and Francophone community as well as arts and crafts created by newcomers to Canada.

“SOUP’ART has been tremendously popular the last three years,” says Monique Lafontaine, French programming and arts education director with the Centre. “This year again, the event will feature live jazz performance from local pianist Sean Ferris at 7 p.m., followed by Acadian storytelling for all ages.”

The evening will also include trivia segments and door prizes. Admission is free and all are welcome. In the spirit of sharing, members of the public are asked to bring a cash donation for the Soup Kitchen.

The members of Cy blend stunning vocal and guitar harmonies to create acoustic music that is at once edgy yet rooted in traditional Acadian and Celtic music. Children of the new wave of Acadian indie-folk, Cy bring their salt-licked sound to Studio 1 for Sobeys LIVE @ the Centre on Wednesday, April 20 at 7:30 p.m.

Made up of Jacques Blinn, Jacques Boudreau, Eric Dow, and Guyaume Boulianne, Cy first came together while all living in the French Acadian Shore in South West Nova Scotia. With three guitars and four voices, the quartet – who now call Moncton home – manage to unite folk, traditional, and progressive styles to create folk and folk-pop songs that are warm and harmonious.

Adding mandolin, percussion, and keyboards in recent years, the group toured their self-titled 2014 record to numerous Quebecois and Acadian music festivals, and as far as France.

They draw their name from a local Baie Saint Marie folk hero from the early 1900’s named Celestin Trahan a Amateur, or ‘Cy a Mateur’ for short. “He was a man who was supposedly possessed by the devil who could be in many places at the same time and whose cup of wine was never empty,” explains Boulianne with a laugh in a recent interview. “He loved gambling and chasing after women, so we wanted to channel a bit of that.”

The Afiara Quartet is a 2016 Juno-nominated string ensemble, described by The Montreal Gazette as balancing “intensity and commitment with frequent moments of tenderness.”

The quartet will showcase classical masterworks in Studio 1 on March 17 as well as two new Canadian works: ‘String Quartet No. 3,’ representing celebrated composer Christos Hatzis, and one of the most exciting young composers in Dinuk Wijeratne, who recently guest conducted with the P.E.I. Symphony.